Anatomy of a new bike launch

You're the millionth customer at the local multi-franchise mega-bike-dealer! And so you've picked up a very special prize! Yep, you're going on an actual bike press launch. Wooh!

So what can you expect? An Apache helicopter ride from your house to a specially-recommissioned Concorde supersonic jet liner? Flown to Barbados at Mach 2 by Bruce Dickinson from Iron Maiden, with Kylie Minogue and Keira Knightley bringing trolleys of Cristal to your lay-flat throne before being decanted into a lime-green SR-71 Blackbird, for the last lap to a brand-new six-mile racetrack built on a man-made island just off the coast of Dubai? 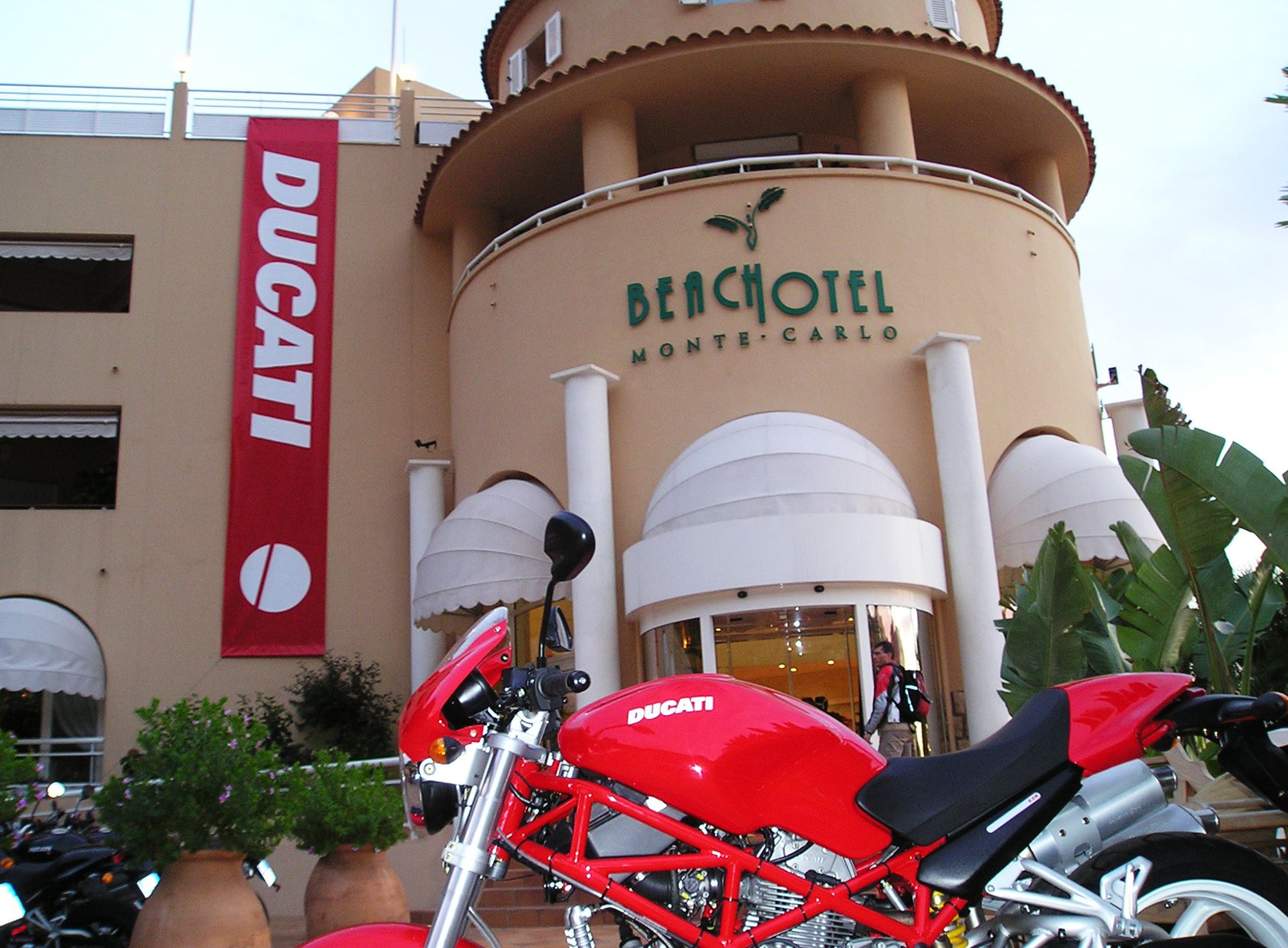 Well, swap Kylie for Tracy from Bedford, and the SR-71 for an Easyjet A319, and you're probably a lot closer. Because, whisper it, but a modern bike press launch isn't quite the Sodom-and-Gomorrha luxo-fest you might think it is. Partly that’s down to simple economics: the margins on even a £15k supersports machine like a ZX-10R aren’t enough to cover first class flights and five-star hotels for a hundred greasy bike journos. Especially when half of them are flying long-haul from the US and Far East (or from Europe and the US if the launch is in the Far East). But it's partly about convenience too. Everyone's on a schedule, every professional journalist would prefer a direct Ryanair flight that lands at the right time 25 miles from the launch venue, than a business class BA flight with a connection in Madrid, and a 95 mile coach connection to the hotel.

So we're travelling on a budget airline. No matter. Although you better make sure there's a PR man handy when you have to pay the £50 excess baggage fee for your enormous kit bag. Those one-piece leathers, boots, helmet and wickable undersuit are heavy! And try to sit near him on the plane too, or else you'll be paying the €5.60 for your coffee and blueberry muffin yourself. Still. The plane might be rammed with pensioners smelling of wee and shaven-headed lager louts heading Spanish-side for a stag do. You've been up since 2.45am to get to the airport in time for the 6:45 flight. And you've got an uneasy feeling that you parked in the £100/day business parking by mistake. But we're off! Off on a lovely bike launch…

The rest of the flight is uneventful, although your ears are a bit sore after being relentlessly talked at by one of the 'proper' journalists. They made sure the PR man sorted them out with two large brandys, plus a couple of beer chasers, and were well on the way before the plane hit the Bay of Biscay. You've been given reams of advice on what to do and what not to do. Main advice being 'don’t crash!', followed by 'make sure you push the bike as hard as you can!"

Check-in time at the hotel, and things are looking up! This is a properly nice place, and the daily room rate on show behind the concierge is fairly eye-watering. We're well out of season though, and the launch organisers won't have paid a quarter of the price shown. A bulk booking of 50-odd rooms, in winter, in the south of Spain or the Canaries will have most hotel managers taking your arm off. A word of warning here – leaving your credit card behind the reception at a five-star hotel can seriously damage your wealth. Unscrupulous members of Her Majesty's Bike Press have been known to put drinks bills *on rooms other than their own*. Eek. Play the dumb foreigner act, promise to bring your card down later, say you've lost your wallet, anything to avoid handing over the plastic. 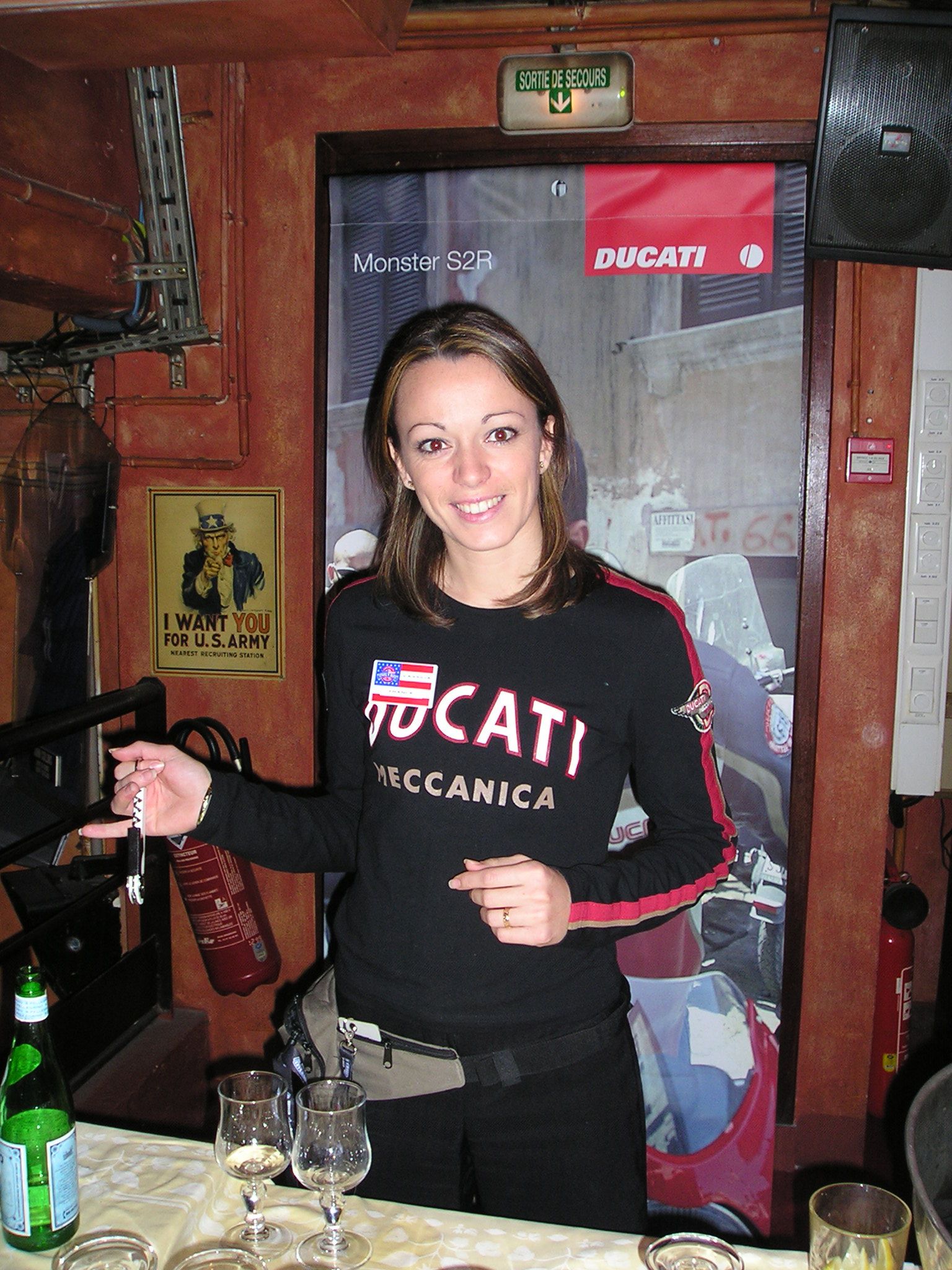 Up in the lift, and into your swish room. There's a nice letter here welcoming you to La Tramposo Golf and Swinging Spa Resort from the manager, Señor Bastardo. And a small gift bag, with the bike firm's logo. What's this? A present? Are they trying to bribe you? Well, not really, no. Obviously any PR man worth his salt will want to put you in a good mood before you ride his new bike. Hence paying for your blueberry muffin even though you were 12 rows behind him. But no-one really believes that a bike journalist can be bought off with a nice T-shirt, a neat little branded USB powerpack, or even an iPod. It certainly won’t make a trusted, experienced tester lie about how good a bike is. Because the lie would last all of about a fortnight, until the bikes appeared in the UK, everyone else had a go and realised it was a stinker! Reputations are hard-won and jealously guarded, and no real bike journalist would risk being caught out giving a less-than-honest opinion on a bike, simply because they got a nice little widget. 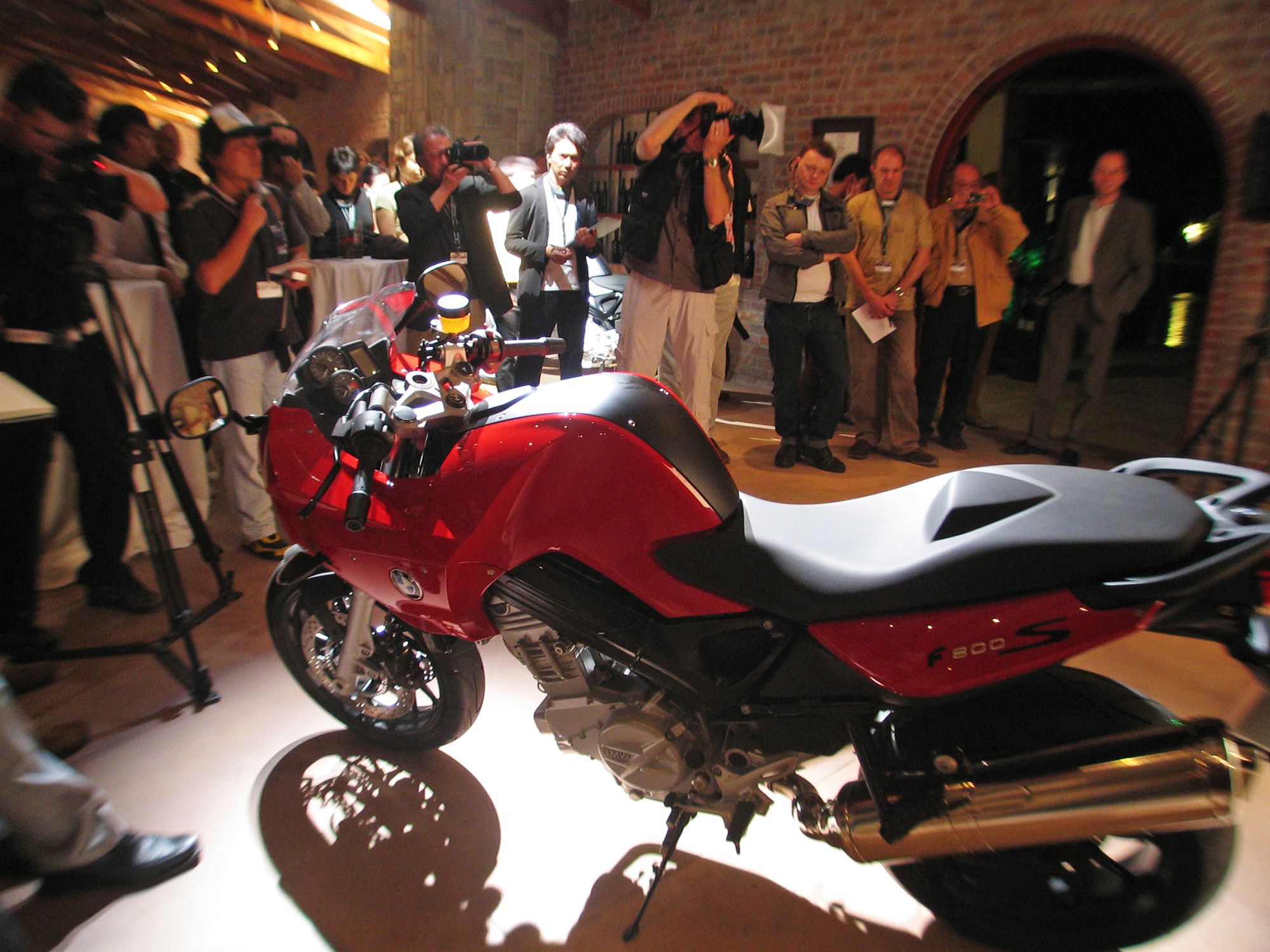 Finally, the next morning, you're up bright and early, and off to the track. The PR men like track launches, because they keep you all in one place, it’s all slightly safer and there's no worries about the cops. In recent years, various European police departments apparently haven't appreciated the delights of fifty-odd international bike journalists, of varying levels of skill and self-control, pinballing their way across the region's highway system on 180bhp stunt machines. Ingrates. Don’t they realise we have to do this in order to give an honest account of how the bike performs? It's our bounden duty to find out just how fast you can wheelie the thing before the new IMU ECU finally gives in. And obviously we need to know if it really does hit the limiter at 320kph: our public demands it. 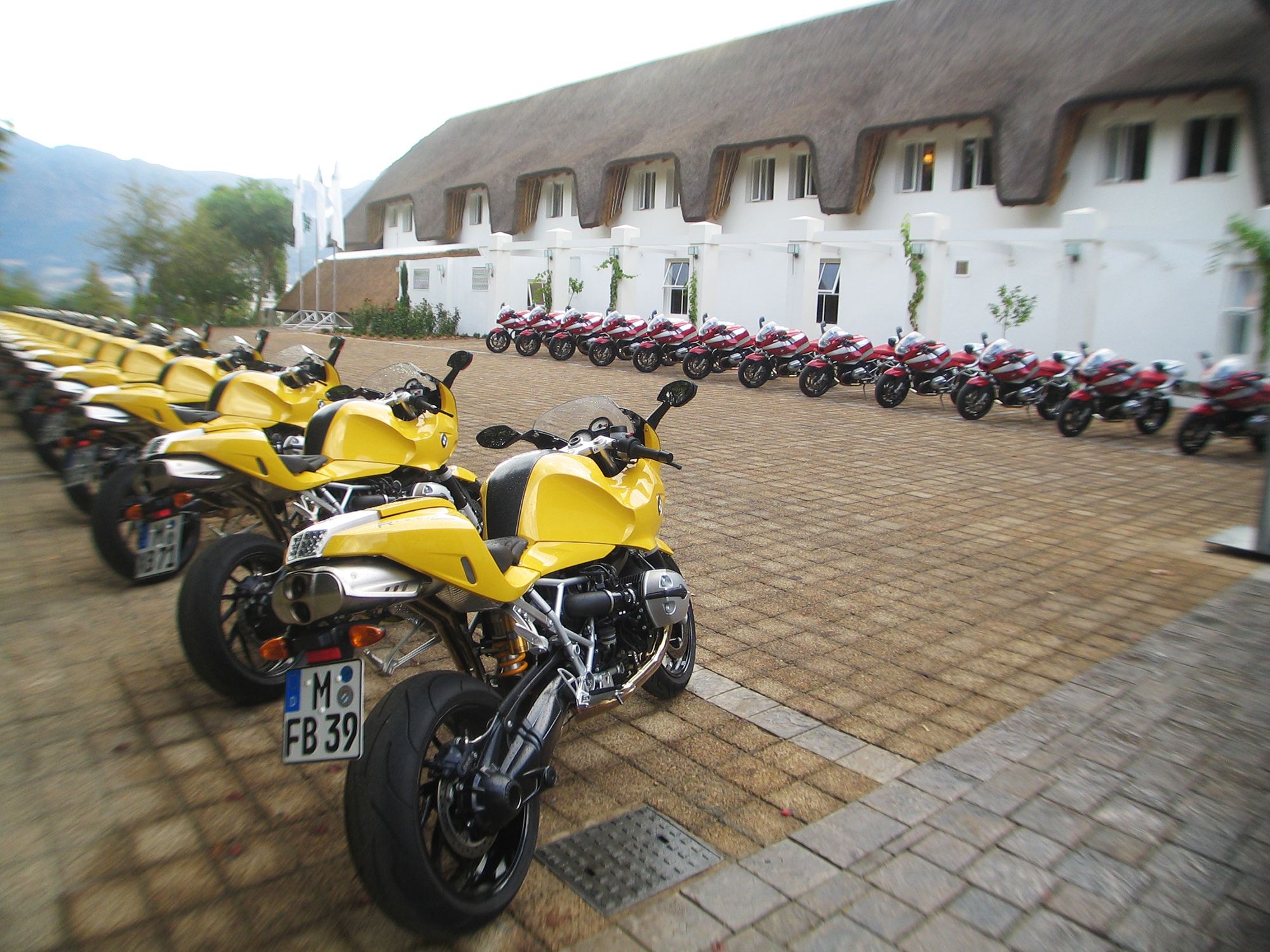 So we're at the track. There's still a lot of faffing, as the Italian PR men check out the coffee, and the photographers perform some expert-level time wasting. But then pit lane is open, and it's time to ride, finally. You're usually pretty happy at the fast end of the intermediate group on trackdays. But most of these guys are a lot faster. Journos aren’t like top-class racers – that's a whole level above again. But some of them do race at national level, with some success. And even the non-racers spend a lot of time riding bikes, and have done for years. Where you do an hour commuting most days in summer, plus three or four trackdays a year, these guys are full-time professional bike riders, forty-plus hours a week, 52 weeks of the year, and in all weathers. Getting your knee (or elbow) down for pictures in a safe, repeatable manner, on road, track, good bike, bad bike, new tyres, old tyres, all takes a bit of skill and experience. And while there are a few slow old duffers too, most dedicated road testing journos will be traversing the circuit at a decent pace.

A couple of sessions into the day, and you're getting the hang of the track. But then it all stops! Lunch has come early, and most of the journos have buggered off into the press room to upload their first impressions onto the internet. Meanwhile, the snappers have all come in, and there's a three hour pause for tracking photos (where the photographer hangs out of the back of the car while you ride perilously close to the bumper) and video on track. More coffee. Some very nice lunch. And you're a little bit sleepy now…

Not for long though. There's a few final sessions on track, then it all gets very frantic. The bus is beeping its horn, and the animated driver is shouting about traffic. The flight home is in two hours, and you're still in your sweaty leathers.

You make the plane, just in time, stinking like an Alpinestars-sponsored tramp. You’re just early enough to make the plane, but your bags are just late enough to catch an alternative flight to Vladivostok. And since you're new to this, you didn't know not to put your car keys into the hold bag, did you? Looks like that airport parking bill will be even pricier than you thought.