A Brief History of Ducati

Ducati initially started in 1926 as a family business making parts for radios, based in Bologna, Italy. The famous Borgo Panigale factory was built in 1936 giving the radio business easy distribution to Northern and Southern Italy – however the Panigale name has since become synonymous with the ‘Red Rockets’ and of course the flagship work-of-art that is the 1299R superbike.


Societa Scientifica Radio Brevetti Ducati, as it was originally known (later renamed Ducati Motor Holding after splitting from its electronics arm), eventually got into manufacturing motorcycles in the 1940’s with a moped based on the 4-stroke 48cc Cucciolo (‘Puppy’) engine – predominantly used elsewhere as a clip-on bicycle engine, manufactured by SIATA. 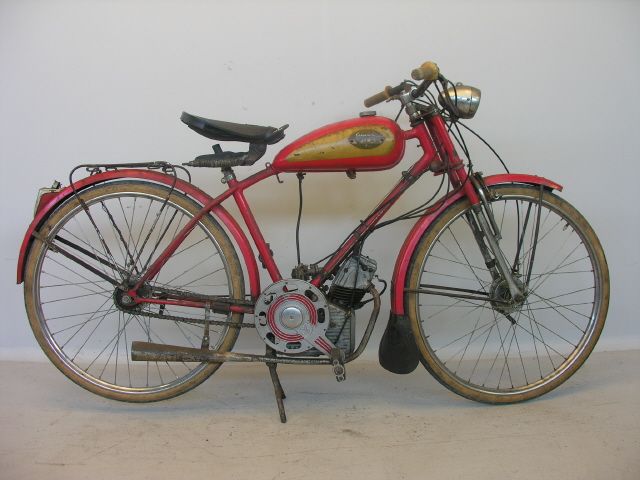 
After WW2, the bomb-damaged factory was rebuilt but unfortunately ended up in state ownership. Since then the Ducati brand has passed through numerous owners, including another Italian motorcycle manufacturer Cagiva, on its way to becoming a trophy brand of the VW Group - alongside another iconic Italian brand, Lamborghini.

In the UK Ducati has grown in popularity over recent years, but still only makes up 2% of all registered motorcycles (26,000 bikes) and is the 10th largest manufacturer - ahead of KTM and Aprilia (both 23,000).

The company was named after its co-founder and industrial engineer Antonio Cavalieri Ducati, who set up the business with his three sons: Bruno led design and construction, Marcello managed the workers and Adriano was in charge of research.

The success of the company is largely attributed to the legendary designer Fabio Taglioni (‘Doctor T’), who joined from the Mondial racing team in the early 50’s and is said to have designed over 1,000 engines for Ducati, the last of which being the 1985 750 F1. He also mastered the desmodromic mechanical valve system for the first time on a motorcycle, which was the basis of all future race machines and eventually in 1967 hit the road with the 350cc Mark 3 ‘D’ (Desmo).

At the end of the 50s, Taglioni started using the image of the prancing horse on his motorcycles – the official emblem of heroic Italian WW1 fighter pilot Francesco Baracca – as a sign of ‘courage and daring’. Whilst no longer used by Ducati, the emblem is still used by the world’s most famous car marque, Ferrari.

Taglioni died in 2001 but his spirit lives on in the Desmosedici. In the same year, the last of the Ducati brothers, Bruno Ducati, passed away aged 96.

The current line of V Twins can be traced back to the Pantah 500SL launched in 1980, which also introduced the trellis frame that became their trademark. Based on the last of the GP500 bikes the 500cc engine produced 50hp but was soon superseded by the 65hp 650SL until it ended production in 1986 (at which point it was repackaged and improved by the then owners Cagiva, breathing new life for a time as the Alazzurra GT650). 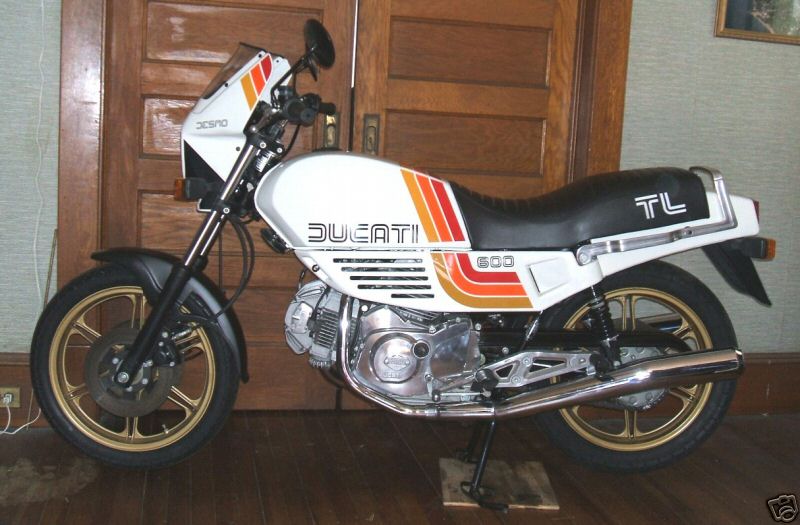 Ducati is renowned for being the motorcycle equivalent of Ferrari, producing some very special motorcycles that the large majority of bikers aspire to own. Ducati has produced some incredibly beautiful motorcycles over the years; arguably the most iconic is the Ducati 916 series (including the 748, 996 and 998 incarnations).

The Ducati 916 is a true masterpiece penned by Massimo Tamburini who is also the designer of the MV Agusta F4 750; arguably two of the most beautiful sportsbikes ever made. The Ducati 916 took the world by storm when it was released. It’s a bike that to this day, that still looks modern, beautiful and very special; it is in essence a timeless design. Also, being powered by a V-twin engine, the 916 sounds just as good as it looks. The 916 series of Ducati motorcycles are modern day classics and all are very sought after, with the ‘S’, ‘R’ and ‘SPS’ versions being very much the models of choice for collectors.

Carl Fogarty MBE, or “King of the Jungle” for those who have no idea what he really meant to motorcycle racing in the 90’s, still tops the WSB all time winners league table with 59 wins between 1988-2000 and 4 WSB championship titles between 1994-1998 – all 4 titles on Ducati 916 series motorcycles. 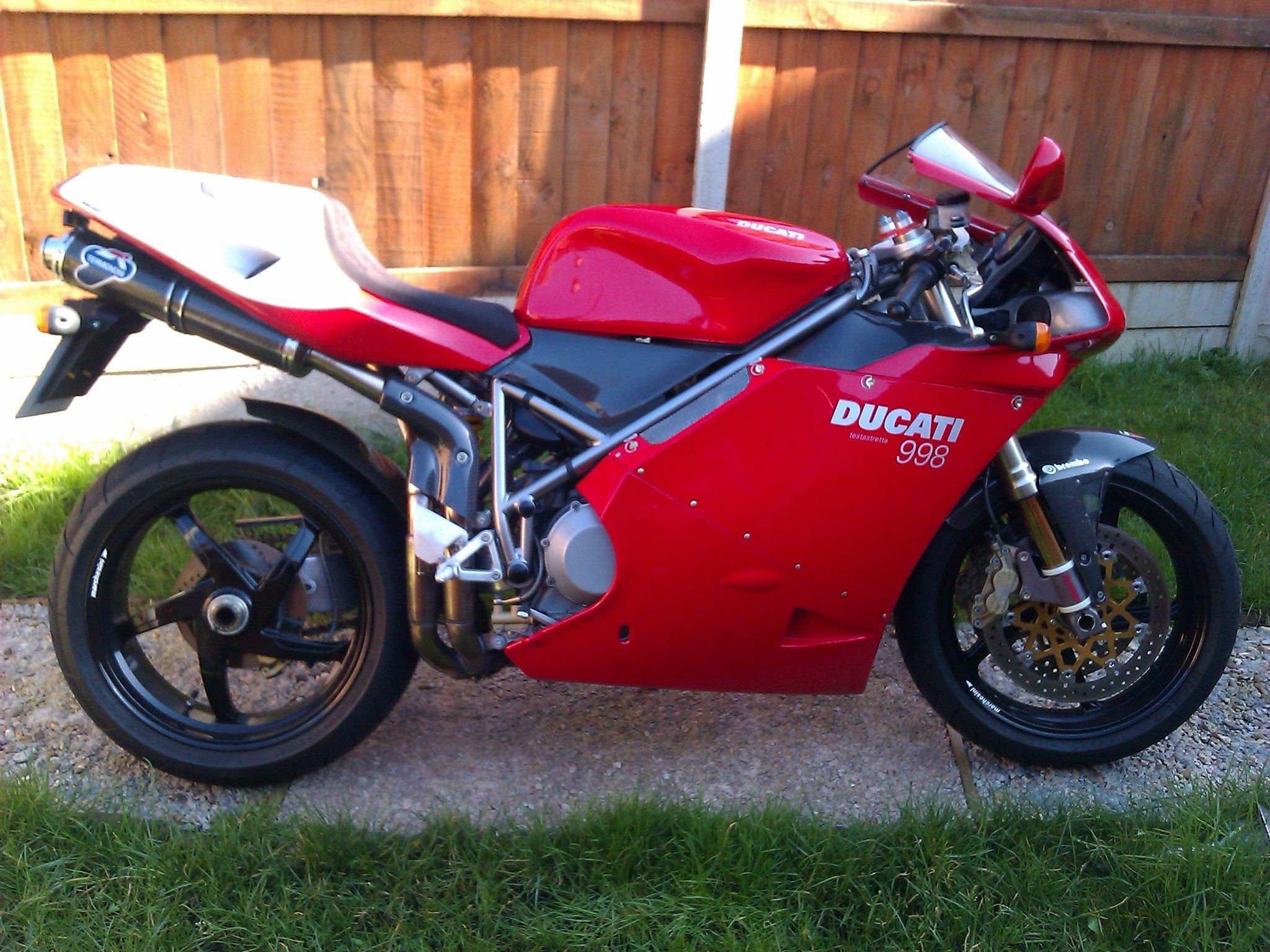 In 2007 Ducati launched the Desmosedici RR (‘Race Replica’), essentially a road legal version of a MotoGP bike based on Ducati’s GP6 MotoGP bike, with a limited production run of 1,500 bikes. The bike retailed at a price of over £40,000 in 2007 so was never in the reach of the masses, more the well healed motorcycle enthusiast or collector. The Desmosedici is essentially a MotoGP bike with lights, mirrors and a number plate. The Desmosedici is also the only Ducati road bike to feature a V4 engine rather than the V-Twin engine that has always been at the heart of Ducati’s motorcycles. Today a low mileage and clean example is worth more on the used market than it was new. 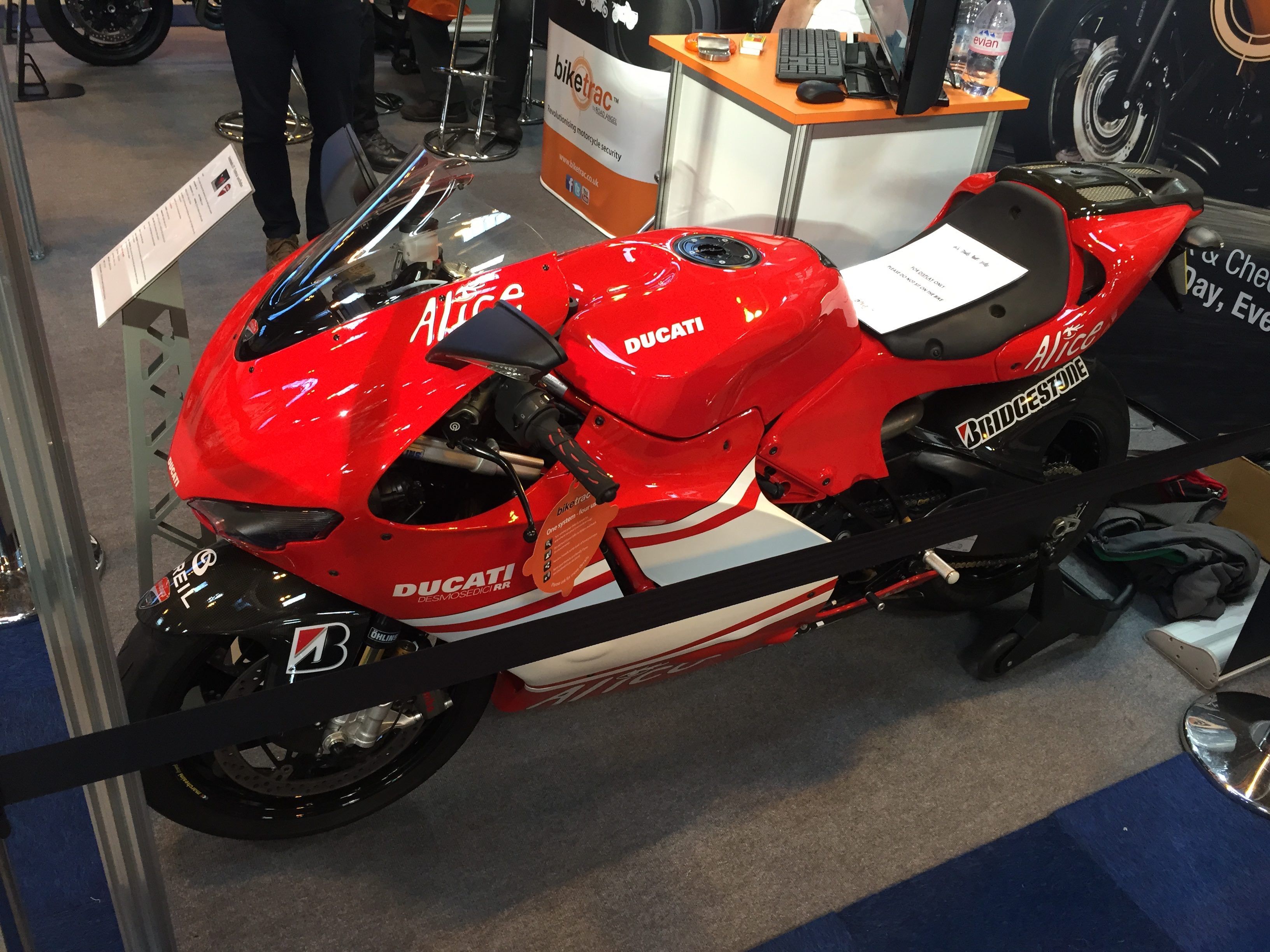 The Superleggera is the first factory motorbike with a carbon fibre frame, swingarm, subframe, fairing and wheels with a limited run of 500 costing an eye-watering £72,000 if you are well connected enough to actually be allowed to buy one! 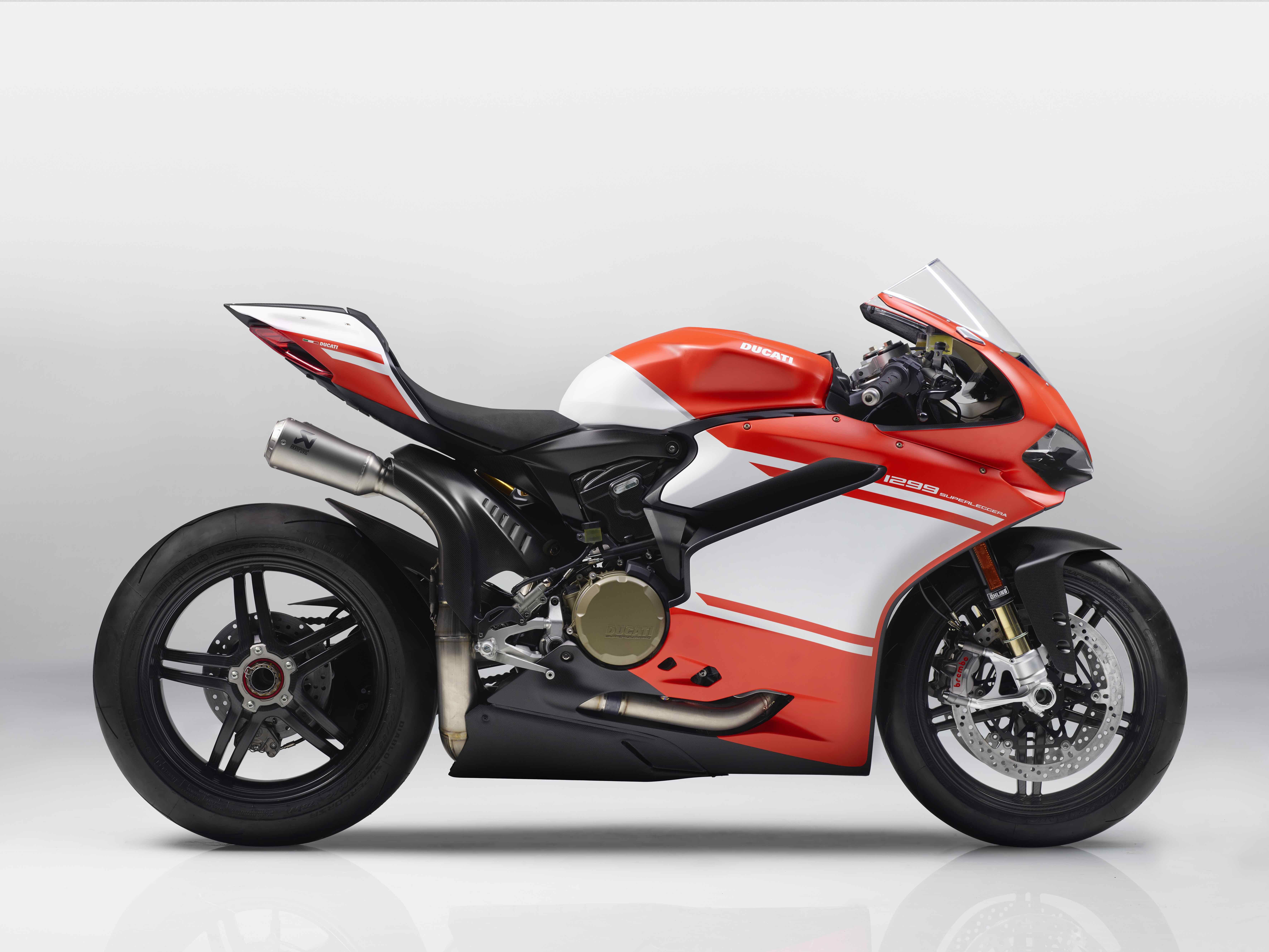 Check out some of our features on other noteable Ducati's including the 2018 Panigale V4, the 'gentleman thug' Hypermotard 950 SP or the hypernaked Street Fighter V4 and Diavel.

After leaving 500GP racing in the early 70’s, which was dominated by 2-strokes, Ducati Corse returned to GP racing in 2003 with the iconic four-stroke V4 Desmosedici GP3 (Italian shorthand for ‘desmodromic distribution with sixteen valves’).

Between 1998 and 2994 Ducati Corse was run as a separate company, carrying out research and development (now a division of the main business). Their first season was pretty successful with riders Loris Capirossi (4th) and Troy Bayliss (6th) helping Ducati to secure 2nd position amongst the manufacturers.

Their real success came in 2007 when the new MotoGP rules limited engine capacity to 800cc and Ducati were joined by Casey Stoner, who went on to win the riders championship on the GP7 with 4 races to spare!

Ducati has since struggled to replicate their 2007 season success in MotoGP, despite significant changes to the bikes frame in 2009 (the GP9 introduced a carbon fibre chassis), their first 800cc big-bang engine in 2010 or securing the now legendary Valentino Rossi (‘The Doctor’) in 2011 as their star rider on the 800cc GP11 and the following year on the 1000cc GP12. Unfortunately Rossi didn’t have the same winning formula with Ducati as the original Doctor (‘Doctor T’)…

Thankfully though British Superbikes (BSB) has had better fortune with the awesome Panigale R ridden by Shane 'Shakey' Byrne winning the BSB championship in 2016 and 2017, followed by further success with the even more impressive Panigale V4R under Scott Redding and Josh Brooks in 2019 and 2020 respectively.

How can BeMoto Bike Insurance protect your Ducati?

Of course we cover standard and modified road bikes, but we also have a suite of off-road and laid-up insurance products as well, whether you have an old favourite Pantah gathering dust in the garage, an off-road Ducati scrambler or a race-spec 1299 Panigale for trackdays at home or overseas.

Call BeMoto on 01733 907000* to speak to a Motorbike Insurance expert who understands what your Ducati means to you. 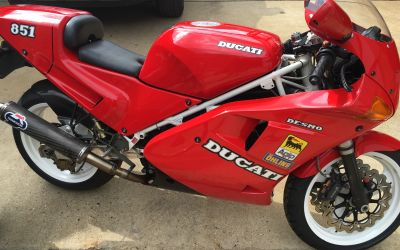 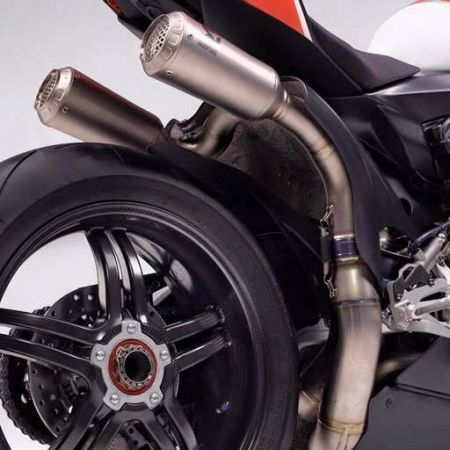 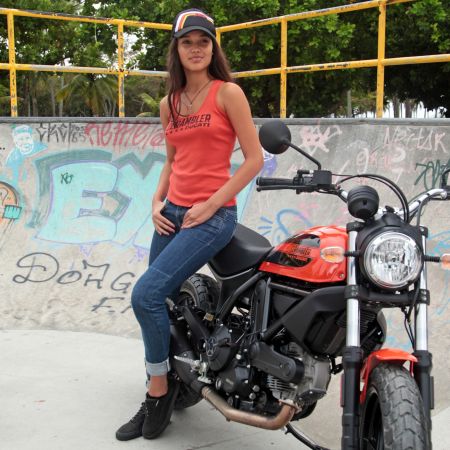 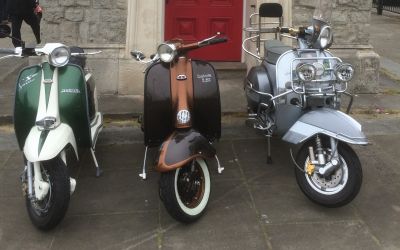 BeMoto looks at the history of the Scooter from the multi-million selling Honda Cub to the ultra-cool Italian Scooters made famous by Quadrophenia. 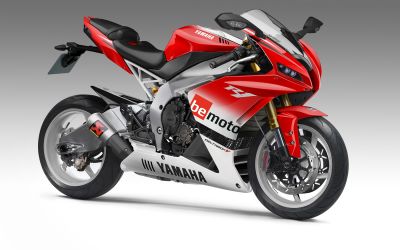