“What do you want brakes for? They only slow you down!”

So goes the old joke... But better brakes will, of course, help you go faster overall. On track, the quicker you can reduce speed, the later you can brake into a bend, gaining precious fractions of a second.

And unusually, performance improvements here add safety as well. Stronger, more sophisticated brakes, combined with modern ABS setups, can help you avoid deadly perils on the road – U-turning taxis, school-run 4X4s pulling out of junctions, errant cows on a country road. Top-notch brakes give you a better chance of dealing with all of these.

As modified motorbike insurance specialists, brake upgrades are one of the most common mods we come across at BeMoto, so our man Alan Dowds has been on a tour of the two biggest brake manufacturers in Europe – Brembo and Galfer - to see how motorcycle brakes are made.

Here’s what we learned..

Now, it might not be obvious, but pound for pound, the brakes are the most powerful part of a bike. Your engine is all sound and fury, and puts out incredible levels of BHP, accelerating you up to speed in the blink of an eye. But the brakes have to apply power in reverse to slow you down and can often match or exceed the acceleration your engine can achieve.

Brakes are very simple components compared with an engine of course – a disc (or drum) with a hydraulically-assisted caliper squeezing two pads of friction material onto the surface. The kinetic energy of the moving bike is converted into heat energy by this action, and that heat dissipates into the air.

They might be simple in theory, but modern brakes use a lot of cunning design to get the very best performance possible. And I’ve recently visited two of the major European bike brake firms to see what goes into the parts we all use nowadays.

First up was Brembo – a legendary name in brake calipers, which really has nailed it in terms of top-end stoppers.

Brembo is the name on the calipers used on almost all MotoGP, WSB, BSB, Moto2 and Moto3 bikes. It’s the brand of choice for all the fancy marques: Ducati, MV Agusta, BMW, KTM, Triumph of course – but also the premium models from the Japanese firms too.


As an aside, it’s one of a few bike component firms that has a solid chunk of the market in four wheels too: fancy Audis, Porsches, BMWs, Aston Martins, Ferraris, Lamborghinis, and many more megabucks supercars all use the Italian brake maker’s parts. You can also add on Formula 1, World Rally Championship, Le Mans GT racing, NASCAR – the whole slew of car racing also sports Brembo calipers.

So – a very serious outfit. And as we arrive at the factory outside the lovely Lombardy town of Bergamo, near Milan, it’s clear that there’s a lot going on. We’re just here for a tour of the firm’s motorcycle production facilities obviously, so much of the sprawling plant will be moot. But it’s still very impressive to see how big it all is. The factory isn’t the only bit – there’s a big R&D sector nearby with an enormous bright red wall, which symbolises the passion and emotion they all bring to their work (or something like that). Add in the firm’s overseas production bases, and you have a genuinely massive, global enterprise. 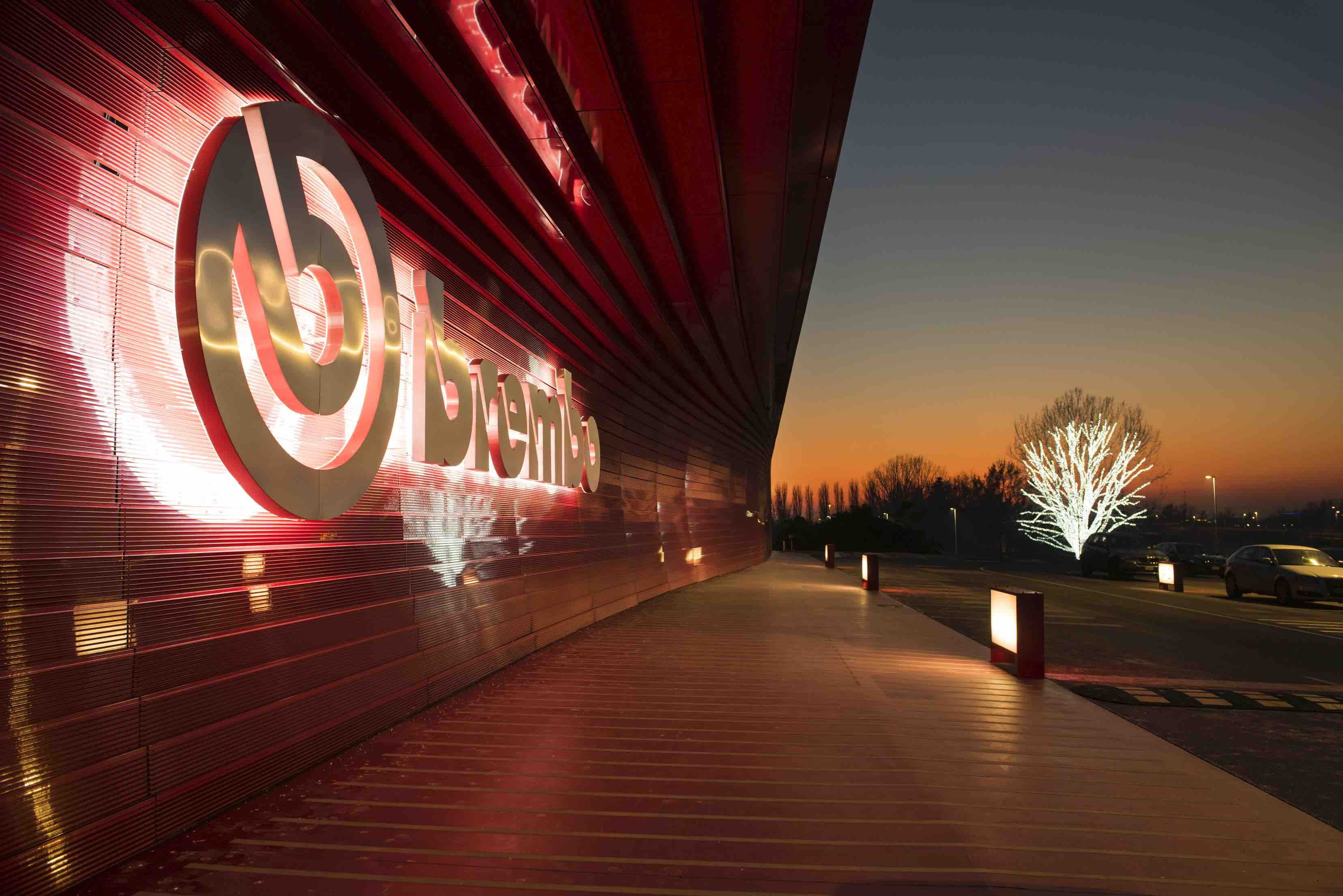 But one of the first things we see is refreshingly artisan. A man sat at a work bench, with a pile of high-end monobloc calipers in front of him, and what looks like a pneumatic-powered felt-tip pen. His mega magic marker is fed with brilliant scarlet paint – and he’s writing a lower case ‘brembo’ into the machined indents on all the calipers in front of him… A lovely touch of hand-finishing on the top-end products you’ll see on Ducati Panigales, MV Agusta F4s and the like.

The rest of the factory is perhaps more like you’d expect. Banks of multi-million Euro CNC machines are chomping their way through blocks of aluminium, churning out the firm’s various calipers. At the ‘bottom’ if you will, is the bread-and-butter OE kit for more prosaic machinery. For example, Harley-Davidson takes a lot of Brembo kit, and there are racks and racks of the two-part calipers you’ll find on the US cruisers. Many middle-of-the-road machines use plain Brembo rear calipers, and these are being churned out here too.

These simple single- or twin-piston calipers are made in two halves, with the basic shape cast in aluminium, then straightforward machining finishes off things like threaded holes, sealing faces and the recesses for the piston seals. They’re quick and easy to make, and once they get a nice anodised finish in the ovens, are ready to give good service.

The next level up in terms of engineering is the four-piston front caliper, again made in two halves. These are also cast, then gently machined, and they make a good, high-performance part at low cost. Next is the ‘billet’ two-piece caliper, where the starting material is a stronger, cuboid block of aluminium, and the two halves are machined from these blocks. The billets have a tougher, stiffer internal metallic structure, so make a stiffer end product, although that is cancelled out a bit by being made in two halves, then bolted together. The machining takes longer, so costs more, compared with just finishing off a cast part which already has the basic caliper shape.

The next level of performance and cost is the one-piece ‘monobloc’ cast caliper. Here, the basic caliper shape is cast in one piece from aluminium, with a modest amount of machining needed to finish it off. Things like fluid passages between the piston pockets are drilled from outside, then blocked off, threads and sealing pockets are all machined out too, and the final caliper gets nicely anodised. Being made in one piece makes it very stiff, though being cast rather than machined from a billet reduces the ultimate performance.

If you’ve been paying attention, you’ve probably worked out the final level – a one-piece caliper, machined from a big billet of aluminium. These are the poshest of the posh and are restricted to proper race bikes and megabucks specials like the BMW S1000RR-based HP4 Race. They also cost £2.5k per side (for the GP4PR caliper used on the HP4 Race), and that’s without discs, pads, master cylinder or lines… 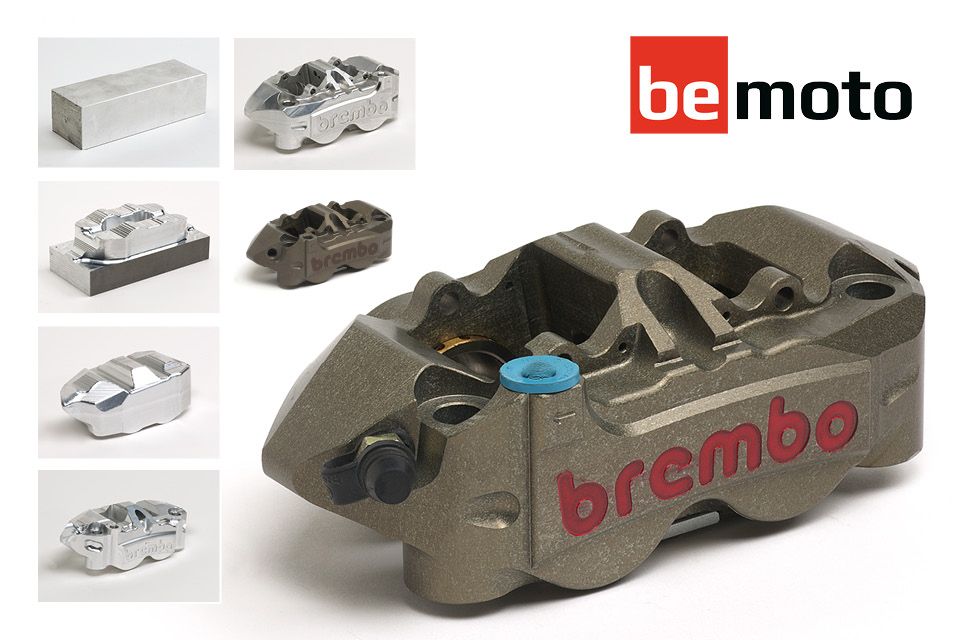 Now, the hard bit here is obvious when you think about it: you can easily machine the outside shape of a caliper, cut a slot for the disc to run in, and drill nice holes for bleed nipples and fluid lines. But how the hell do you get a machine tool to the inside faces of the caliper to cut out the pockets for the pistons? There’s only a very tiny gap in there, and you need to make four fairly deep holes for pistons to fit in there.

We’d love to tell you – but Brembo is keeping it a secret! It’s one of the few times I asked a nice PR person a question and they flat out refused to tell me.

“Can I see the machine which makes these calipers?”

Asking around after the visit offered a couple of possible answers – a cunning sort of articulated cutting head, borrowed from watchmaking, is one suggestion. The other is spark erosion machining – where a small machine head uses high-energy electrical sparks to vaporise tiny bits of metal hundreds of thousands of times a second. Both are expensive and time-consuming, and (assuming Brembo uses one of these processes) explain the high cost of these fanciest of über-calipers… 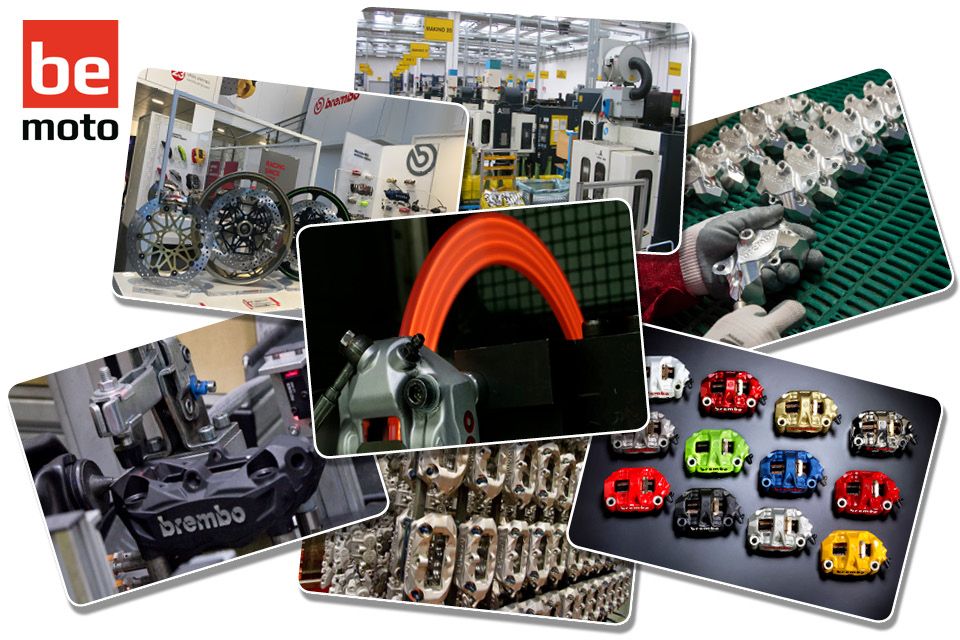 A few months after my Brembo visit, I’m at another brake parts factory, this time near Barcelona in Spain.

The Galfer firm specialises in brake discs and pads, so is a good complement to Brembo, which mainly sticks to making calipers.

It was Galfer that first came up with the ‘wave’ type brake disc, which uses a non-circular profile to improve cooling and friction performance. Having a constantly-varying swept area on the working part of the disc helps keep the pad surface clear from outgassing and debris, giving more efficient operation, while the extra surface area increases cooling. 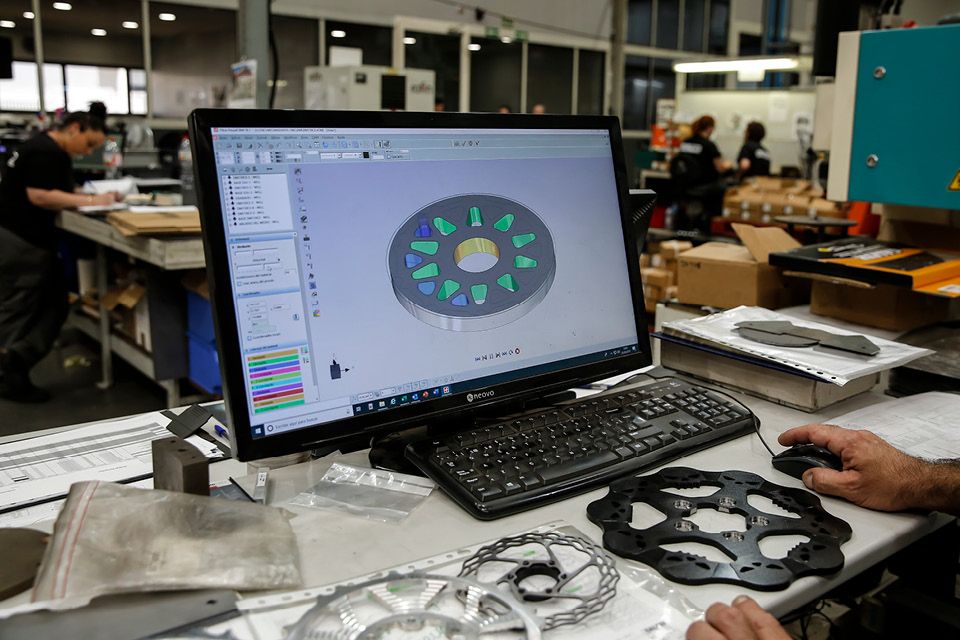 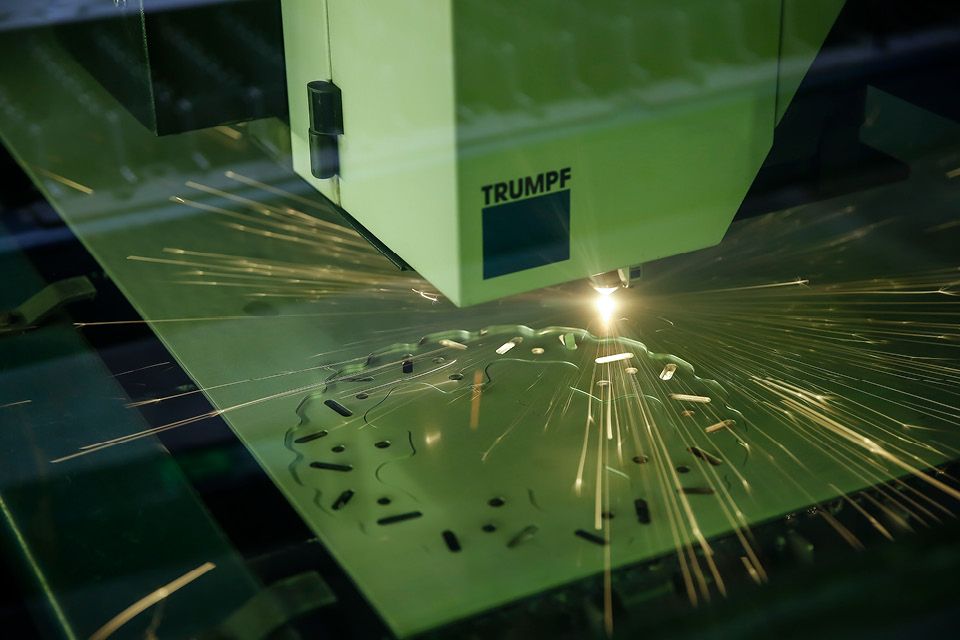 The firm supplies the aftermarket performance sector, but also makes OE fitment discs for KTM and Triumph, amongst others. Some of those are standard parts, others are for the firms’ posh bolt-on options, like KTM PowerParts and Triumph’s Genuine Accessories range.

We see how Galfer makes its discs first hand, and it’s impressive stuff. Large 200kg sheets of prime stainless steel are loaded into special laser-cutting machines. These are controlled by computer and use a powerful laser beam to trace out the shape of the disc required onto the sheet. Each sheet is turned into 20-30 disc blanks, depending on size, and the most complex shapes are easily cut out by the laser. Galfer even makes some novelty-type ‘skull’ discs for the custom cruiser aftermarket sector – nice… 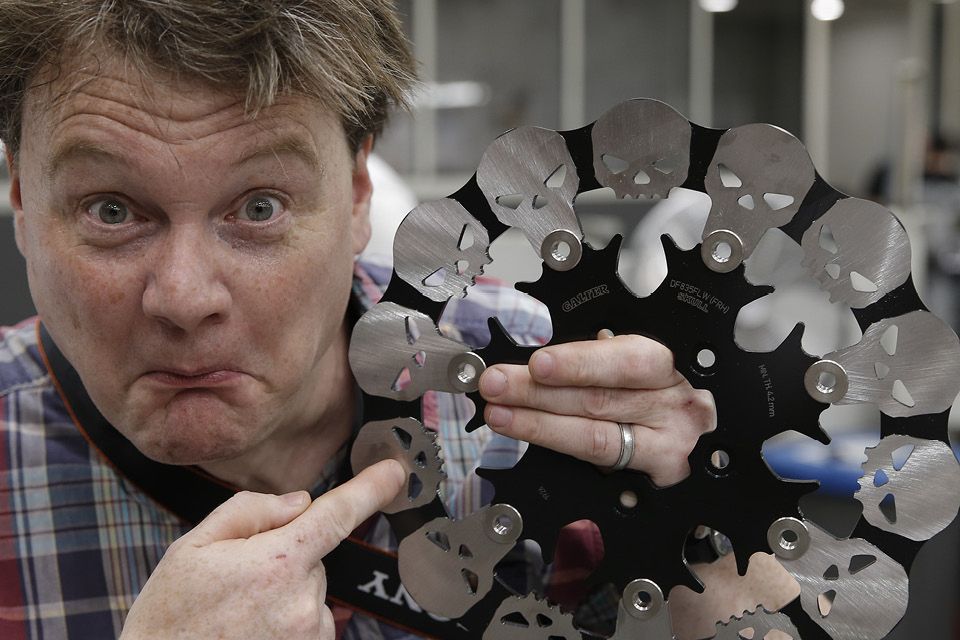 Once the discs are cut out, they’re finished off with some cunning heat treatment to make the metal more suited to the braking job, then they’re ground either side to make them all shiny and perfectly flat. Finally, they’re rivetted onto steel or aluminium disc carriers, depending on the application, and packaged up ready to go.

At the other side of the Galfer factory is the pad production line. This is quite grimy in comparison to the disc area – some of the friction material ingredients, like carbon black, make lots of mess. The pad production process itself is a little like making a cake: loads of different powdered organic and inorganic materials sit in sacks in a row, and various quantities are added to each recipe to make slightly different pads. Galfer makes pads for bicycles and trials bikes, as well as superbikes, so it needs a wide range of possible friction characteristics.

The powder mix is put into a pressing machine, which compresses it into the appropriately-shaped moulds. At this stage, the little pucks of material look solid, but they crumble at the slightest touch – they need to go through some serious heat and pressure treatment later on to turn into the tough, solid finished friction pad. These are then bonded onto the metal backing plate, painted, and then given the final touch – another laser machine etches the Galfer logo and the pad part number onto each pad backing before they go to be packed. 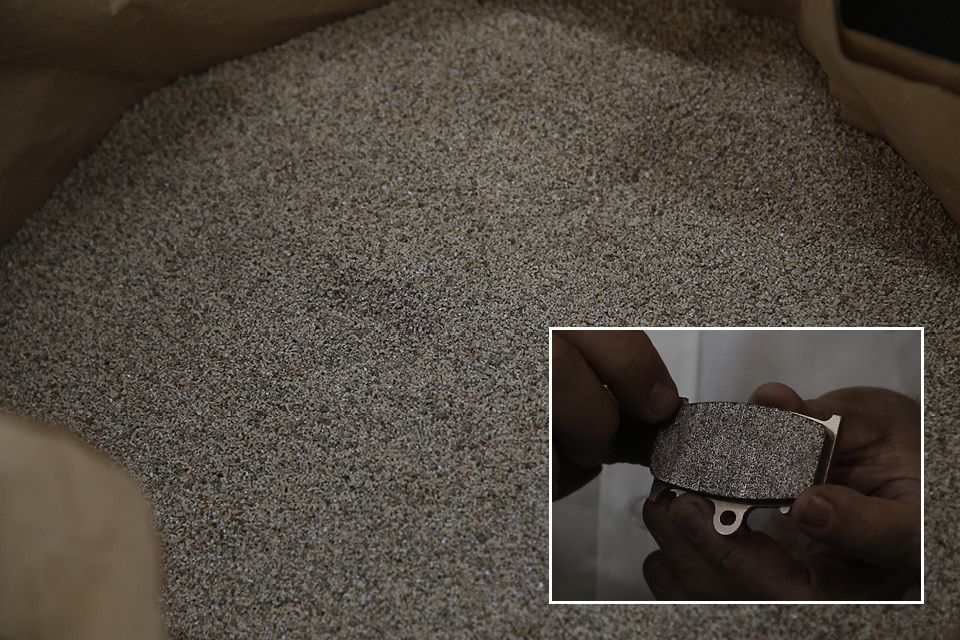 So there you have it. A quick look at how the best calipers, discs and pads in the business are made. And the next time you haul on the lever to avoid one of those U-turning taxis, random farm animals or steamed-up school-run Range Rovers, be grateful for the good folk who’ve helped you stop in time…