If you’re in the market for a brand new, wide-barred and naked ‘mid-capacity’ (600-900cc) bike there’s never been a better time to buy. The competition is hot, with pretty much all manufacturers entering the fight with a punchy contender dishing out the beats in their own style; the new Triumph 765 Street Triple (available in S, R or RS), Yamaha MT-07 and MT-09, Kawasaki’s Z900, the Ducati Monster 821 and Suzuki GSX-S 750, among others.

But KTM has now stepped into the ring with its new 790 DUKE...

The 799cc, LC8c parallel twin power package plugs the gap in their naked bike range between the marmite 690 DUKE and 1290 SUPER DUKE R ‘Beast’. As many folk don’t regard singles as proper motorcycles (we at BeMoto love them) and with The Beast being out of reach for many in terms of performance and cost, this new bike really does bridge the void for riders who want the attitude and looks of a KTM without breaking the bank (£8,499) or the inevitability of a licence laden with points.

BeMoto grabbed the keys to this ‘mini Beast’ for the day. 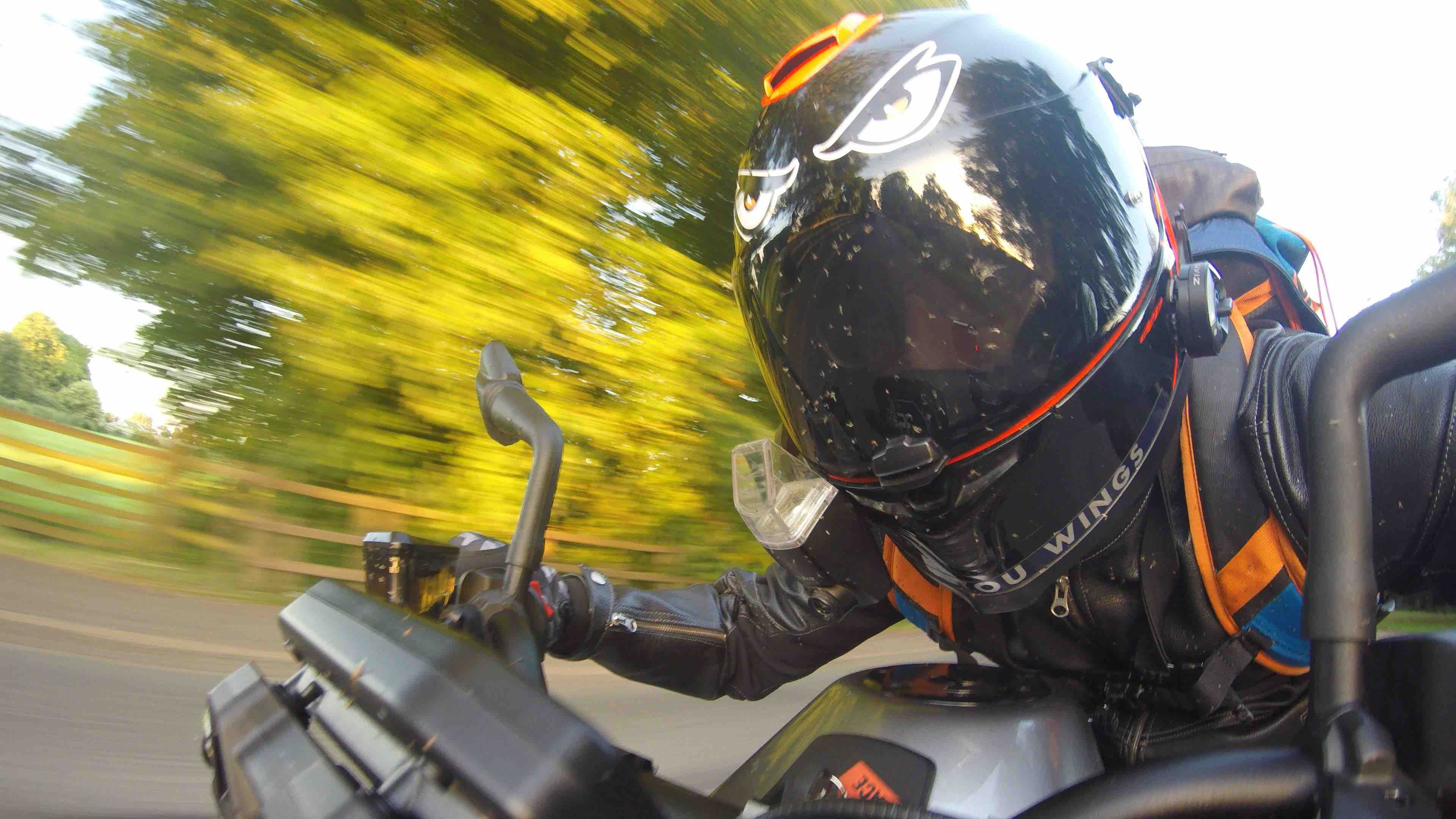 The all black version definitely looks meaner than the orange and the bike is more than a nod to the styling of its 1290 bigger brother, but with enough of its own character.The split LED headlight with surrounding daytime running light is distinctively now the ‘DUKE face’ for KTM and is immediately eye-catching – especially for car drivers - when you see one coming towards you.

The high-level standard exhaust actually looks quite good, tapering into the sharp lines of the tail unit (which needs a tail tidy). There’s minimal bodywork, being a naked, but the tank sits really high which we think throws the lines of the bike out when looking at it side on. It needs a bellypan. But aesthetics are always subject to dispute and if we all liked the same thing, life would be dull.

Onboard, the seat height is not massively low (825mm with a lower version available along with a lowered suspension option) but because the bike is so narrow, legs get a straight route to the ground; confidence inspiring for new or returning riders. Or shorties.

The wide bars position can be adjusted in four different positions at the clamps and also rolled forward or back. Levers are also span adjustable. In the middle of all this is a funky TFT colour dash that bursts into life with the ignition on, giving it the familiar KTM ‘READY TO RACE’ message. The dash is very cool and can be tailored to your display preferences on what information you see. With the ‘illuminated mode switch’ on the left bar, like all modern KTMs, it’s quite intuitive to fly through the settings on the move. 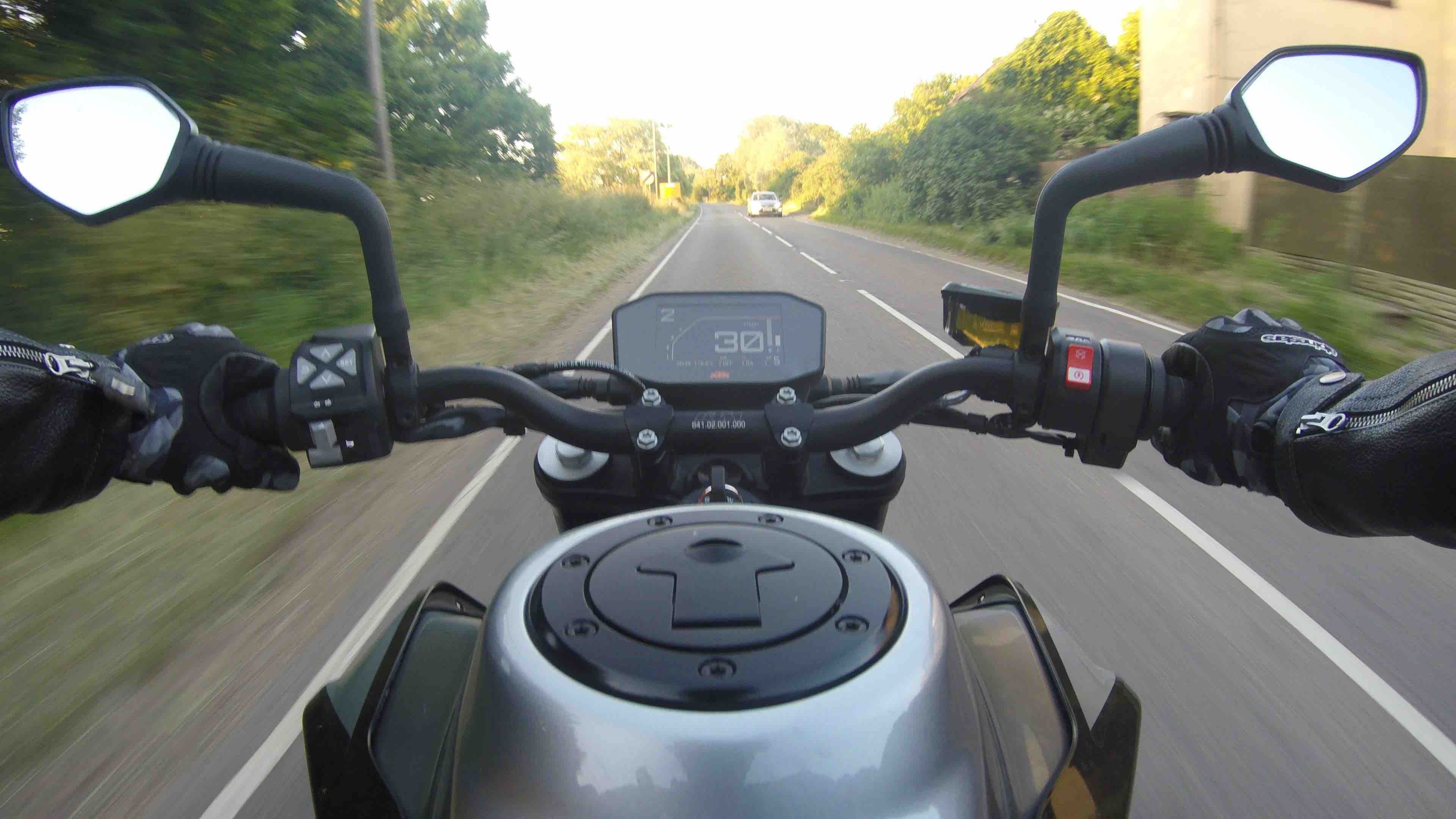 The bike has Ride Modes of ‘Sport’, ‘Street’, ‘Rain’ and the exciting ‘Track’ version. The different modes alter the power level, delivery and throttle response, along with altering the sensitivity of the lean-angle measuring traction control. Track mode takes this further by allowing you to choose the throttle sensitivity and the level of traction control interference on the fly from nine positions (9 is lots, 1 is barely anything). There’s also the option to turn off Anti-Wheelie mode (why would anyone want to wheelie…) but still leaves the traction control functioning.

Another fun part of the Track mode is Launch Control. Once the bike has had its first service and is up to temperature, with this setting engaged you can hold the throttle pinned (don’t back off even 1% or it resets) and manage the power out with the clutch (you can’t just dump it). The system holds the bike at optimum torque and manages the wheelies so you can do the perfect start from the, erm, traffic lights. Still, we had fun with that ;-)

Out on the road, the compact parallel twin sounds like the Austrian firm’s V-twins, thanks to the crankpins being offset by 75° to give 435° firing intervals. The engine is super-smooth; really linear with its delivery, which begs you to rev it hard when you could probably do with shifting a little earlier.

With the exhaust being high-mounted, you really get a good earful of that noise with the added pops and bangs from the slick quickshifter. We don’t really know why anyone would want the official PowerParts Akrapovic exhaust when the stock items sounds and looks (subjective) good.

If this bike does attract new and returning riders, the bike feels compact, agile and confidence inspiring. KTM know how to build great handling bikes and the 790 DUKE makes easy work of fast and slow corners to the point you want to go back round and take them again. The same can’t be said of some of the rivals in this class, who have great engines let down by poor suspension and brakes…

The bike has received a bit of a kicking for not having adjustable suspension. But a tea break poll at BeMoto revealed only 20% of us regularly play with our suspension. KTM and WP have clearly worked hard to get a setting that works well on most road riding situations for all manner of rider sizes.

The standard Maxxis Supermaxx ST do a surprising good job and will probably work well in all manner of weather conditions and last for ages – great for those using the bike day in, day out – but we’ve heard that a pair of Pirelli Diablo Rosso Corsa II’s really transform the bike for sportier riding, not just in terms of grip but further sharpening the steering and increasing feedback.

Speaking of sportier riding, when getting more aggressive with the 790 it became quickly apparent the brakes don’t really sit on the same level as everything else on it. A couple of times I asked a bit more from the lever to be met with the same stopping sensation, no matter how hard I pulled on the lever. And I wasn’t the only one at BeMoto Towers that said that. Maybe some more aggressive pads or the PowerParts ‘wave’ discs are needed. Or a set of Brembos… 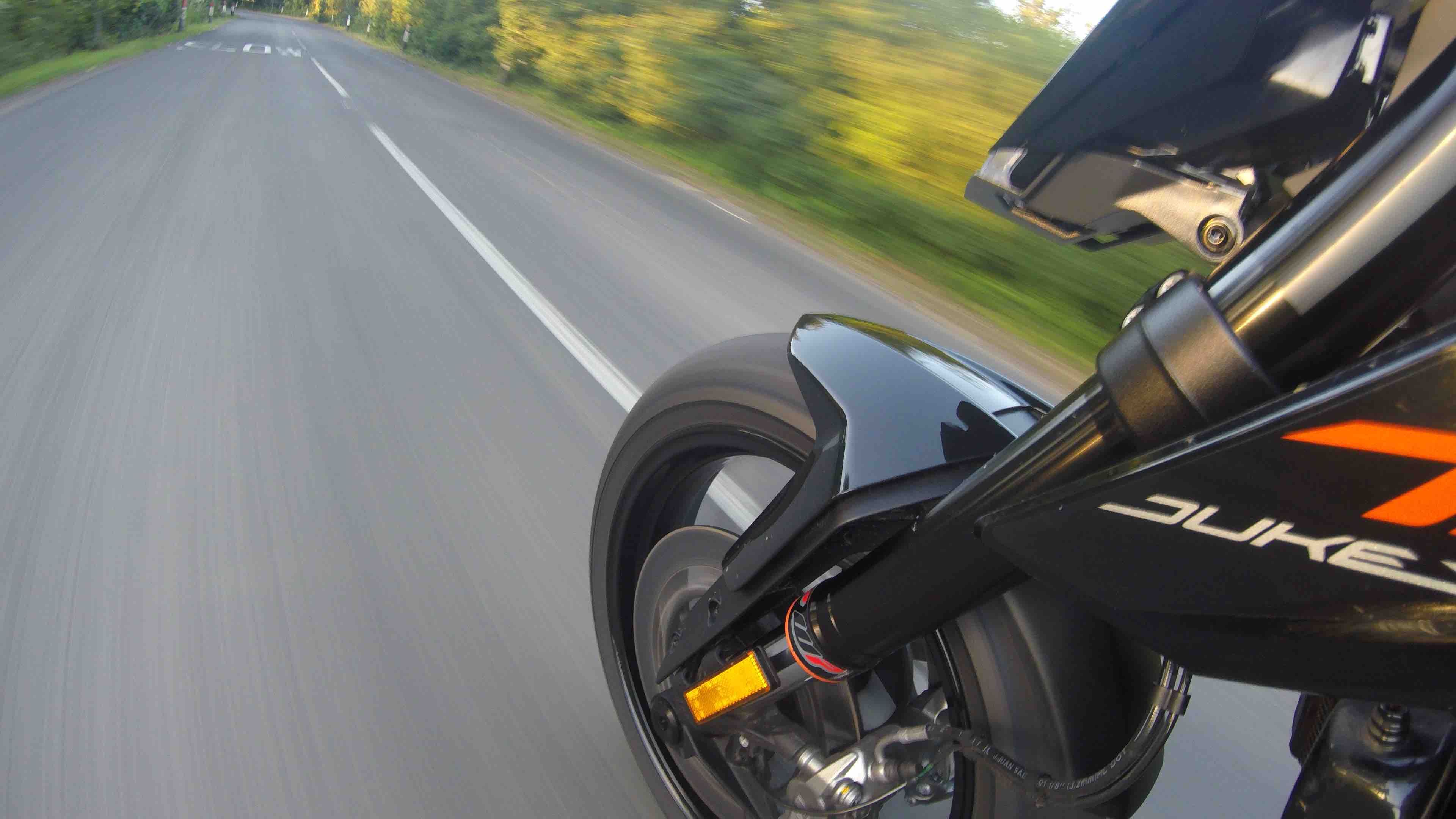 But for the money, the 790 DUKE is an incredible alternative. It’s pure KTM with its sportiness and aggression yet inspires confidence with its wickedly addictive chassis and engine combination that would definitely appeal to riders of all experience and ages. Spec wise, it boasts an electronics package as standard which no other rival comes anywhere close to - even as an optional extra – and has a huge array of official PowerParts to trick it up further.

KTM don’t position this as a track bike, but for those who want to raise the pace we’d recommend spending some money on the brakes and tyres. Maybe we will see a 790 DUKE R that answer these gripes for riders with a heavier right wrist. Or they should take a look at the 1290 SUPER DUKE R instead. The best thing is, there’s a new fighter in the game and its punching way above its weight.

Check out www.ktm.com for more info. 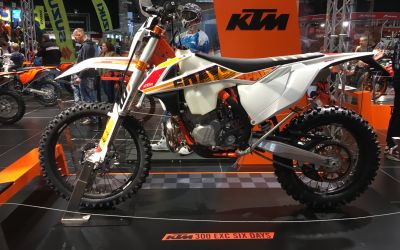