The single cylinder engine (meaning just one cylinder and piston) is most common in low capacity sportsbikes specifically 49cc and 125cc. To achieve maximum performance the two-stroke has always, historically, been the engine of choice. The two-stroke in comparison to a four-stroke provides higher brake horsepower (BHP) output per cubic capacity (CC), has much fewer moving parts and therefore is lighter in weight: important attributes for a motorcycle with core focus on performance. The term ‘two-stroke’ describes the power cycle; quite simply a two-stroke engine has two movements (strokes) of the piston up and down per one turn of the crankshaft, whereas a four-stroke takes four strokes of the piston per one turn of the crankshaft to complete a power cycle.

It is also common for low capacity Sportsbikes with two-stroke engines to have liquid cooled (also known as 'LC') rather than air cooled (also known as 'AC') engines. A liquid cooled engine is quite simply an engine that has liquid (engine coolant) circulating through the cylinder head and engine block; the liquid absorbs the heat and is cooled by use of a radiator. Liquid cooling allows engine designers to control the heat of an engine allowing it to run at far higher tolerances than an engine purely cooled by the air; resulting in higher power outputs to be extracted from an engine before it becomes unreliable or unsafe.

All 125cc Sportsbikes are now single cylinder four-strokes, popular models are the Honda CBR125R, the Yamaha YZF-R125, the Aprilia RS4 and more recently the KTM RC 125. The newer incarnations of the 125cc Sportsbike are undoubtedly more reliable than their older brothers, much more economic and do not burn large quantities of expensive fully synthetic two-stroke oil. However these motorcycles produce far less BHP and have very linear, therefore arguably less exciting, power deliveries - some would further argue that they are not quite so much a serious proposition. However the latest incarnations of the four-stroke 125cc Sportsbikes still offer a lot of fun also being much more suited to learner riders.

Read our first ride review of the 2019 Yamaha YZF-R125 with the VVA variable valve actuation system. 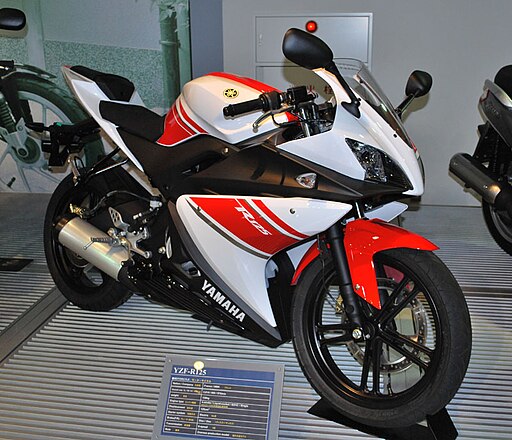 Sportsbikes up to 49cc can be ridden by those aged from 16 with a Provisional Licence that have completed Compulsory Basic Training (CBT) as long as the Sportsbike is restricted to 28mph and L-plates are displayed. 16 year olds have a further option to take a theory test, if passed an AM Licence will be awarded and the rider will not need to display L-plates.

Sportsbikes over 49cc and up to 125cc can be ridden from the age of 17 with a Provisional Licence and valid CBT. Riders aged 17 or over also have the choice of passing a theory test to obtain an A1 Licence; when passed L-plates do not need to be displayed and riders can carry a pillion passenger. It is important to note that 125cc Sportbikes need to be restricted to 11kw (14.6 bhp).

To ride a de-restricted 125cc Sportsbike the rider needs to be over the age of 19 and have either an A2 Licence (the first step in obtaining a Full A Licence allowing motorcycles to be ridden with a power output of up to 46.6 bhp) or a Category A (‘full’) Motorcycle Licence.

How can BeMoto protect your 125cc Sportsbike?

Bemoto offer tailored Sportsbike Insurance that is right for you. Get a quote online or call us on 01733 907000 to speak to a bike specialist who understands your 50cc or 125cc Sportsbike and what it means to you.