Big-bore adventure biking – on a budget....

Adventure bikes – they’re everywhere these days, both literally and metaphorically.

A sector which barely existed 20 years ago is now top of the pops, with loads of different options for all sorts of riders. From barely-disguised soft ‘adventure’ touring bikes like the Honda Crossrunner and Kawasaki Versys, through 165bhp superbike-powered beasties like the BMW S1000XR, and on up to ‘ride-to-Mongolia’ behemoths like the BMW R1250 GS Adventure, there’s something for everyone. Even novices are looked after, with small-bore pluggers like the Royal Enfield Himalayan and KTM 390 Adventure.

But where in this melange of mountainous motos does the new Suzuki V-Strom 1050 XT lie?

Well, I’m glad you ask, because we’re up at Suzuki HQ to pick one up for a couple of weeks to find out. The very nice press workshop technician wheels it out and parks it up: a giant day-glo orange and white velocipede glinting in the sunshine. The big V-Strom is new for 2020, but the engine is still the venerable 1,037cc eight-valve V-twin which has its roots in the TL1000S and R sportsbikes of the late 1990s.

That motor’s had a going-over for 2020 of course, with a tad more power (up around 7bhp), Euro5 emissions compliance and ‘more refinement’ according to the firm.

The bike has also had a thorough restyling, with paint and lines that echo Suzuki’s own adventure machine heritage – the Paris-Dakar racebikes of the 1980s and 90s. Back then, big singles like the DR750 DR-BIG and DR800 were a bit of a niche machine in the UK (they were more of a hit in mainland Europe), but the aggressive styling and solid performance mean they’ve still got a cult following. Suzuki’s clearly attempting to tap into the retro appeal while also building a modern contender for the litre-class ADV sector. 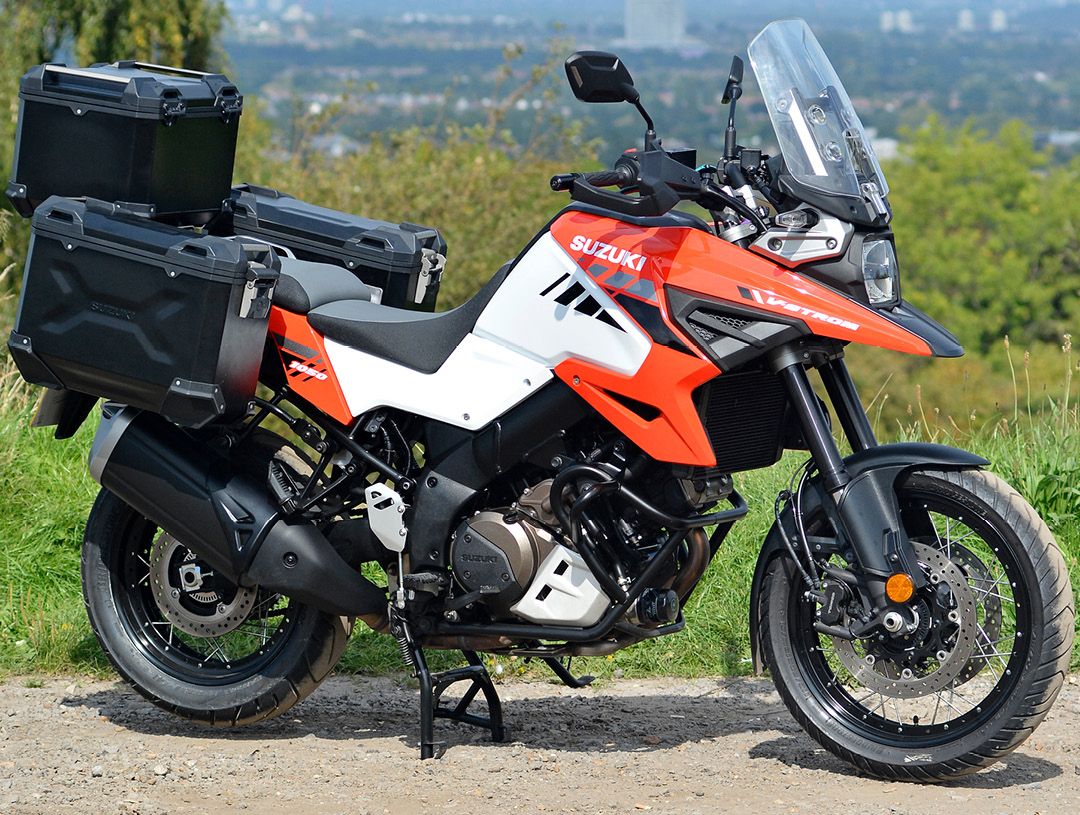 The chassis has a fairly conventional layout with a mild off-road bent. The close-fitting front mudguard is an obvious downside for hardcore off-road antics, but the wire-spoked rims, 19” front wheel and long-travel suspension all helps. The engine crash bars and bash plate on this XT version also lend a tough, practical air to the V-Strom, while the handguards, adjustable screen and optional aluminium hard luggage underline the big adventure vibe. 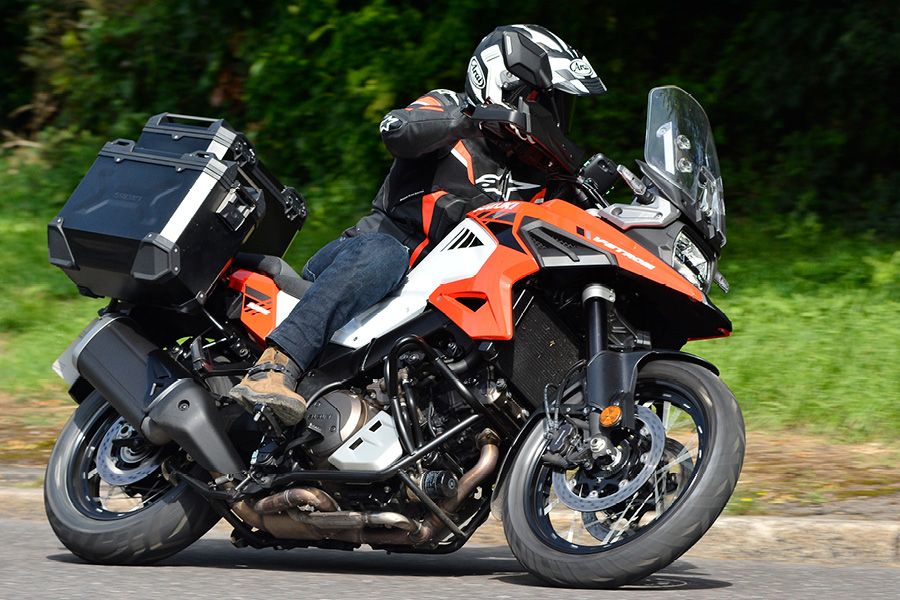 I’m straight into enjoying that vibe, with my usual motorway ride back home to London from Milton Keynes. There’s a ton of fun to be had on the roundabouts and short dual carriageways of MK first though, and the big orange and white Suzuki is a hoot here. The big, grunty V-twin motor slingshots you forward out of each junction and the four-piston radial calipers provide loads of sharp stopping power too. Suzuki has bumped up its usual rider aids spec on the 1050, and the IMU-assisted ABS and traction control package gives another level of confidence when you pile on the gas.

On the M1, and the new cruise control comes into play, helping me navigate the various speed limits we come across as the traffic comes and goes and the ‘smart’ motorway signs blink into life. A new ride-by-wire throttle system allows the cruise control, and it’s a useful addition to the V-Strom (though it’s not present on the base non-XT model). The screen has a neat quick-release manual adjuster with just one lever – but it’s on the outside front of the screen… You can, just about, stand up, reach over and operate it, but it’s a bit hairy and not really ideal. Hot grips are an option I’ll not be needing today, but I’d have liked to see them as standard on this premium XT, but I’m sure any good dealer will throw them in at a good price when buying.

The big Strom has that ‘king of the road’ feel which huge adventure bikes have: the bright LED lights, tall aspect, wide hard alloy luggage and bright colours help clear the fast lane, with even fast Audis parting Moses-style. The engine itself is a little short on outright power though, and you have to give a big handful to get up to proper warp speeds. Around 106bhp is a decent output, but it’s well down on some of the full-bore competition; BMW’s R1250 GS is making around 135bhp, and something like a Multistrada 1260 or BMW S1000 XR is the far side of 150bhp. Not a problem for most folk – but if you’re a power fiend, the V-Strom might not quite float your bhp boat. 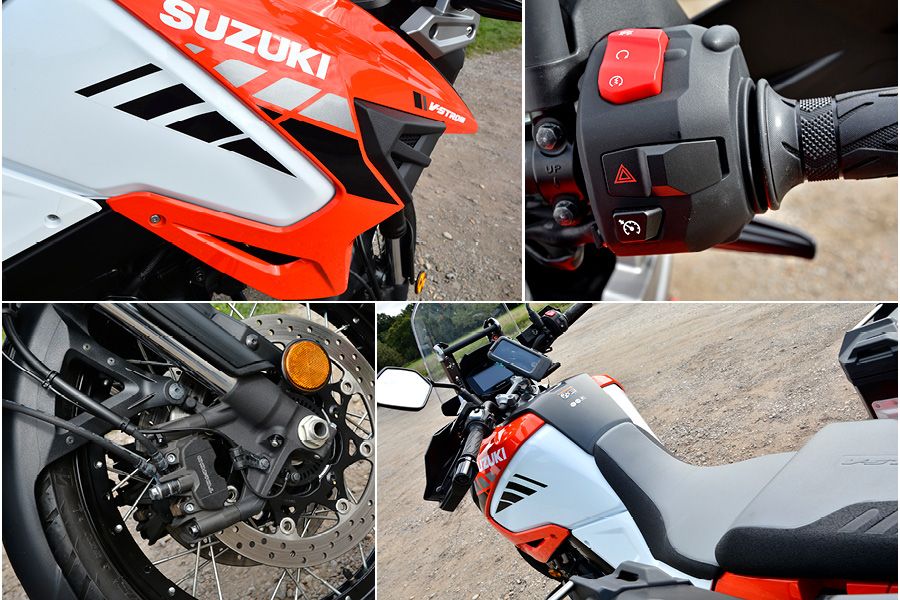 Away from motorway mile munching, the big Suzuki works really well too. Obviously, with the hard luggage on board it’s a bit restricted in traffic, but pop the panniers off (a very easy job) and it’s pretty lithe for traffic splitting. The low-speed handling is sweet as a nut too: while riding for photos, it was a breeze to do feet-up U-turns in the road when going back and forward for John G the snapper man. That’s not something you can say about every big ADV machine, and is the sort of thing you only really find out on a test ride rather than scanning the tech specs.

Turn it up a bit on a twisty back road and the V-Strom is good fun. There are limits – the conventional long-travel suspension feels soft at times up front, and that’s where something like BMW or Ducati’s electronic semi-active suspension pays dividends. The Suzuki does have fully adjustable forks though, so you could have a bit of a fiddle to suit your usual riding style and routes. Those brakes impress still too – loads of power, and maybe even a touch too much initial bite. The ABS means it’ll never catch anyone out of course, but the sharp response takes a wee bit of adjusting to at first. 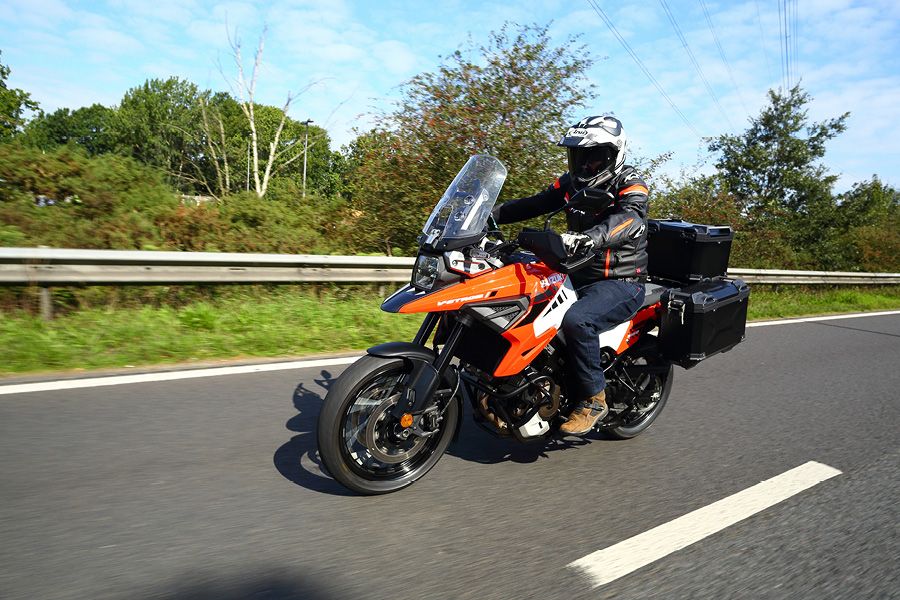 So – the V-Strom 1050 XT looks the part, is comfy and capable at touring speeds, nippy round town and a blast on back roads. It’s not the most powerful option – but is on par with the likes of the 100bhp Honda Africa Twin and the 113bhp Ducati Multistrada 950. The riding aids are a little bit behind the curve, but work well and optional extras like the hard luggage are great. The pricing is somewhere-in-the-middle for the class: £11,600 is a couple of grand more than the base version of BMW’s slower and smaller F900 XR, but a few hundred quid less than a Ducati Multistrada 950. It’s also £1500 less than the Africa Twin. So there’s plenty of analytical juggling to do when you’re working out which bike would be perfect for you.

That’s the benefits of a thriving adventure sector though – and a nice ‘problem’ to have if you like. And on the basis of our time with the V-Strom, it’s definitely worth a look – and a test ride – if you’re thinking of buying in this class.

The XT is the fancy version of the new V-Strom, and comes with extras like the cruise control, smart IMU-assisted ABS with hill-start and other functions, adjustable seat and screen, centre stand, hand guards and engine bars. The standard model is a fair bit cheaper obvs: just £9,999.

On the topic of Adventure bikes, if that is your bag, you could check out our recent review of the Yamaha Tenere. 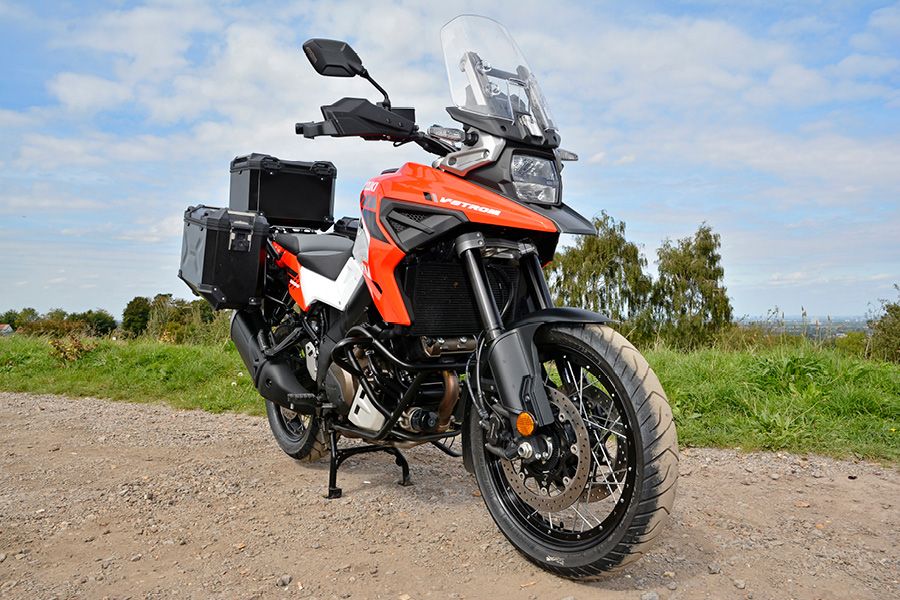