Putting together a magazine group test can be a hilarious minefield, especially if it involves taking a load of bikes abroad…

Of course, it doesn’t always work out like that. Things can go wrong. Very, very wrong indeed. Badly wrong. We're not talking about the obvious stuff here. Crashes happen, they just do. And bikes are dangerous things. But sometimes, you'd actually prefer a crash or two instead of the catastrophic cock-ups in organisation which can strike.

The potential starts early, when you're booking the bikes. Simple – phone the press office, pick a date, put it in the diary. Sorted. Well, you were right up till the previous magazine throws the bike (one of only two in the country of course) up the road, royally screwing the whole thing. Gah. That's assuming you didn't have a brain fart and book one bike for the 27th of next month, not this month.

It’s the middle of winter, the UK roads are as grippy as the local ice rink so it makes sense to transport the bikes to warmer foreign shores. Once the bikes are all in the van, though, you're on your way. Right? Wrong. The gods of nylon are not smiling on you this week, and that tie-down strap has picked exactly the wrong time to finally give out. Expensive Italian bike 'A' catapults into the side of expensive Italian bike 'B', snapping off a mass of small-yet-vital, thousand-pound componentry and scattering it like diamond confetti across the Sprinter van floor.

Emergency repairs complete, and you're winning now. On the Eurotunnel, and you've remembered, unlike the last time, to check everyone has their passport. Onto the Continent, and you're ready to rock out of Calais. Or not. Because there's a Gendarme checkpoint, and they pick on you. "What ees zees m'sieur? €100,000 of brand new motorbikes in your van? Have you all the paperwork to prove you own these? Non? Zut alors!"

Zut alors indeed. You're now five hours behind schedule, after frantically getting permission letters from four bike firms to take their property abroad. The stress is getting to everyone. And maybe, just maybe you can blame that for filling the diesel van with 90 litres of super unleaded just outside Paris. The AA Euro cover is worth its weight in gold, and the very nice man arrives quickly. But he doesn't have a time machine, and instead of kipping in luxury on the Cote d'Azur, you're dossing in a damp Ibis near Dijon. 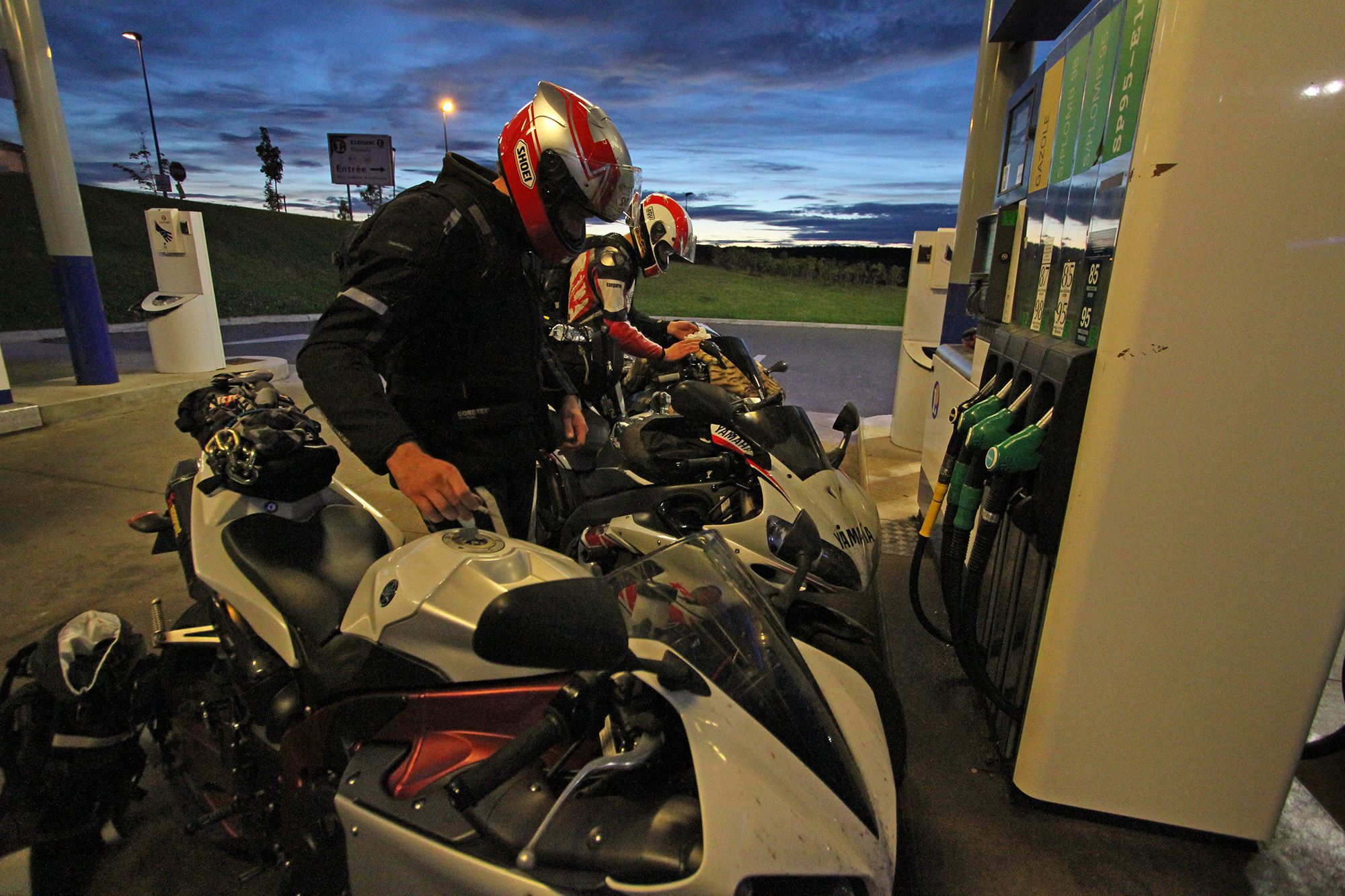 Luckily, on this trip, you haven't left the keys to one or two bikes in the ashtray on your desk at home. That's the sort of mistake you only make the once. And when you adjusted the chain on the Honda after the top speed runs, you were very, very careful to torque the rear wheel nut up properly afterwards, unlike that time a few years ago.

Finally out on a bike, blatting along the Autoroute, you manage not to leave a jacket pocket open, so your wallet, phone and passport can all be blown out onto the road. You’ve learned too that you should get the static pictures done before the riding shots to avoid those hilarious moments when a bike is crashed before the camera has fired the first frame. Talking of bikes falling over, it’s not a good idea to have the shortest rider on the biggest bike, at least when there are a dozen passes of a corner to make for the photographer which means two dozen turns in the road.

At the end of the day, although tensions are still high, the group avoids a blowup so serious that the snapper threatens to delete all the pictures and get a train home because luckily, photographers are stable, well-adjusted human beings all round. Phew.

That night, you make sure to park the van very carefully, under your hotel bedroom window, with the doors against the wall, and a few very heavy chains locking the bikes together inside. Everyone remembers that famous time when a whole bike full of vans went walkies on a big French road test, and the paperwork was dreadfully tiresome… Next morning goes well – no sudden snow showers, although someone does manage to smash a front mudguard when unloading a bike with a disc lock on. At least none of the bikes slip off the van loading ramp, much.

Job done, and we're heading home. Praying that we've not all picked up food poisoning from the dodgy prawns last night, and that we've had our last irreparable van puncture for a while too. 48 hours later, the team's back into the office, laughing and joking about what a great time we had. Checking out the pics and coming up with the funny captions. A fantastic operation right enough.

*All of these calamities have happened, some more than once, on UK bike magazine road tests…