We look at the tech and science behind properly joining up bits of metal – and see how it’s applied to make an exhaust end can for our Yamaha MT-10 long term bike (see video at bottom of this feature).

Ooooooh there’s something saucy about a nice weld isn’t there? One with them lush rainbow colours maybe. Nice straight line of perfectly formed little puddles of frozen metal. Massive ripples of ally up at a thick chunky steering head casting. Or a neat ring around a titanium exhaust link pipe. Cannae beat it mate. Knocks your bolts, rivets and high-tech epoxies into a cocked hat when it comes to joining bits of metal together.

But why is that? Well, partly because welding is, generally, the gold standard when it comes to fastening metal parts. There’s nothing stronger, apart from making the thing in one piece to start with. But it’s fair to say that there’s quite a bit of mystique about welding too.

But more importantly, you need special skills. Any fool can work a spanner and a torque wrench (though we still see plenty of folk making an arse of it…) It’s not hard to open a pack of Araldite. But welding is much, much harder. There’s that combination of technical nous and hand-eye coordination that makes it a proper talent, like playing an instrument, or plastering a ceiling perfectly. It takes a long time to get good – even just acceptable, functional welds on the simplest of metals is far harder than it looks. And to get those gorgeous rainbow fillets takes years and years and years of practice to perfect.

There is a caveat to that last part actually – robots. You can bypass those years of practice by spending a few hundred grand on a specialist welding robot, which can do precise welding jobs, over and over again with no mistakes once set up…. And it’s one of those, rather than a wizened Japanese sensei which will produce much of the welding on production motorbikes and high-volume parts like exhausts. 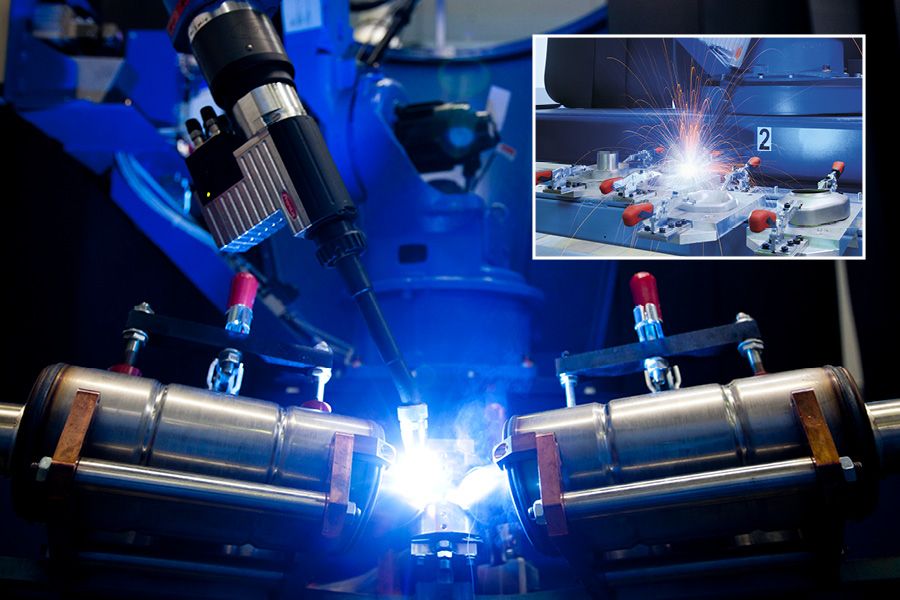 We’re not interested in that here though – we’re looking at the small-run, high-end stuff turned out by said wizened senseis – whether they’re in Yokohama, Texas, Emilio-Romagna or the West Midlands. And that often also means exhausts. They’re the most common bolt-on performance part bought by bikers, they’re on show, and can make a big difference to the sound, power output and looks of a bike.

Welding is vital for exhaust manufacture simply because no other fabrication technique will easily stand up to the temperatures reached on an exhaust. Okay, you can get away with rivets and carbon fibre parts on the outer shell of an end can, where the heat is less fierce, but headers, collector boxes, link pipes and silencer entry and exit caps are all mostly welded. And in the now, sadly, rather niche world of two-stroke performance exhausts, hand-welded expansion chambers are perhaps the ultimate expression of the welder’s art.

But what actually is welding? At its most basic, it’s about melting metal, on a small scale, along a joint, to meld two or more pieces into one part. Simple enough you’d think – but the devil is in the detail. To melt metals like stainless steel or titanium, the most common exhaust materials, takes a lot of heat. The melting point of stainless is around 1,500°C, and titanium is even higher at around 1,700°C. Even aluminium needs 700°C before it turns to liquid. You also need to keep the heat in a precise, small area – meaning you need to heat up the welding spot super-fast and move on, before the heat starts to melt the rest of the work piece. 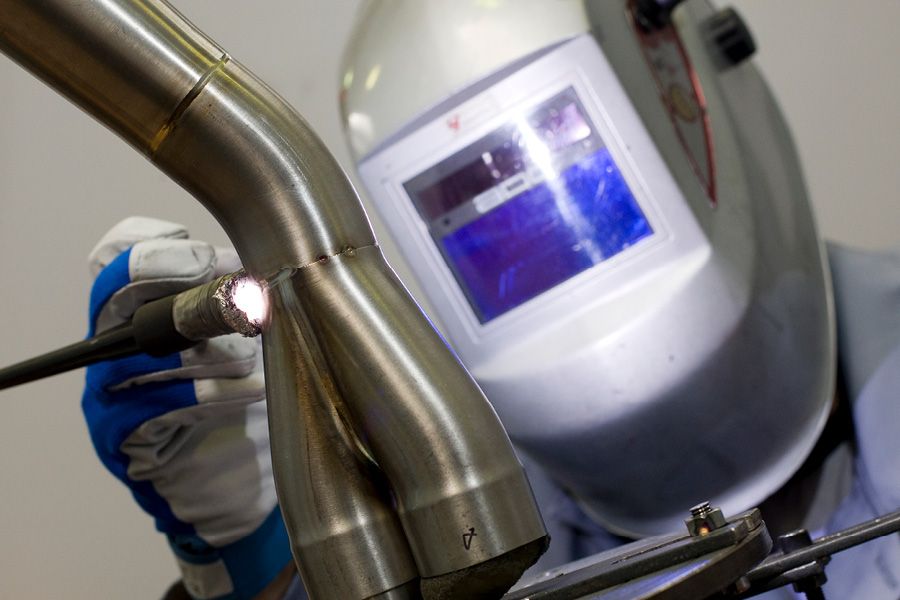 The other problem with heat is that it changes the metal. If you heat up steel or aluminium close to melting point in air, then it starts to react with the gasses in the atmosphere – oxygen to form oxides, nitrogen to form nitrides. Most metals used in industry are also alloys, which contain small amounts of other ingredients to alter the properties of the final alloy. So stuff like magnesium, carbon, copper, molybdenum, nickel and chromium are all in there too, and all will react with the air, forming impurities that can weaken the final weld.

Finally, extreme heat also changes the crystalline structure inside the metal alloy, which can dangerously weaken it. In industrial processing, this can be avoided by re-heat-treating the whole component after manufacture, but that may not be possible if you’re repairing a part in-situ, for example.

So – we need to get a lot of heat into the parts we’re welding, fast, and we need to protect the weld from the atmosphere as we work. One solution is a welding technique called TIG – Tungsten Inert Gas welding. Here, we have a tungsten-tipped ‘torch’, which carries a powerful electric current and can form an arc – a giant continuous spark basically – that instantly heats up the work piece. The torch also has a gas nozzle at the end, surrounding the tungsten tip, and the machine flows an inert gas around the welding area, keeping the oxygen and nitrogen from the atmosphere at bay. That gas can be argon or helium – so-called noble gasses, which don’t react with the metal, keeping the weld relatively pure.

The TIG torch creates the heat and protects the surface then, and the welder uses a filler rod of suitable metal to add material into the weld as they go along. The choice of filler rod depends on the job in hand – what the base metal is, and what kind of weld is needed. 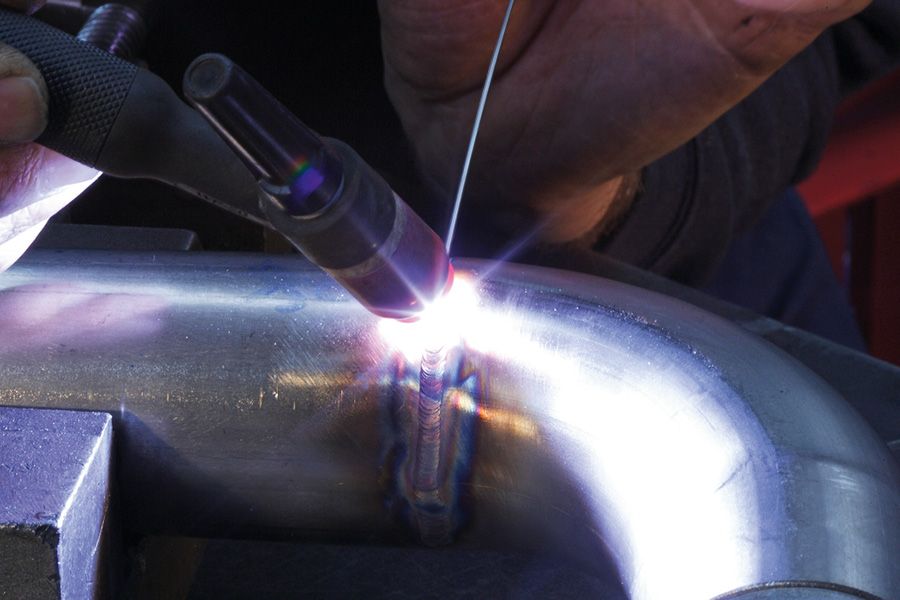 Sounds simple. So we took the BeMoto Yamaha MT-10 along to Pro-Race, a local pipe maker to have a new exhaust welded up. Small manufacturers are always on the lookout to borrow new bikes to use as a template to make up their products, and they generally supply a free can in return for this. The guys at Pro-Race were able to use our bike as a ‘jig’ to work out the sizes and angles needed for the pipe work, and how to arrange brackets, clamps, link pipes etc. It’s a fiddly job, with a sort of 3-D chess feel – and you have to be careful not to interfere with stuff like swingarm movement, oil drain plug and filter access, fairing panels and all that stuff – while still trying to make a product that will perform to a higher level than the stock part. It’s easy enough to make an end can lighter than stock to be fair – the OE parts are generally a bit on the over-engineered side, with complex internal chambers and valving, made in heavy duty steel that will last a long time. If you’re able and willing to compromise a little on that, you can make a much lighter product, at a good price, which will last almost as long, maybe with a little bit more noise, and a touch more in terms of performance at peak power. 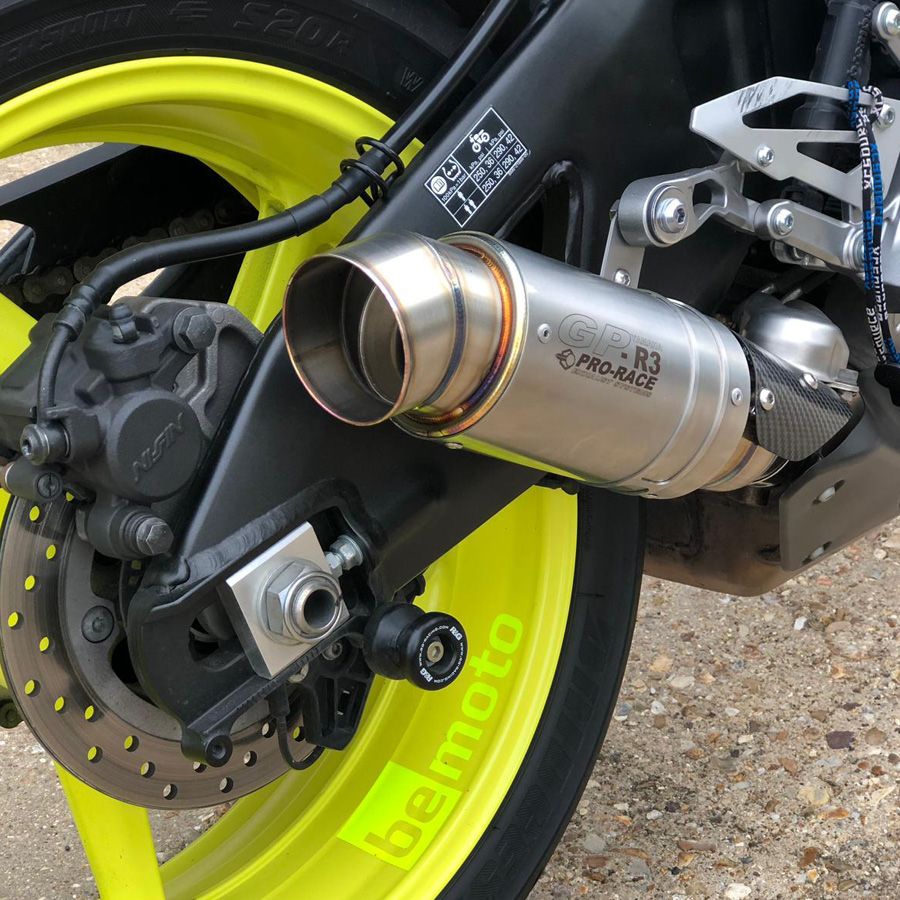 Best of all though – we took a bit of video (below) during the process. It shows the basic elements of the procedure, once the designer has worked out the dimensions and the overall look of the exhaust. This is a shorty end can, with a link pipe, nicely tucked-in and with a cool big-bore exit. The main exhaust system on the Yam contains the catalysts, exhaust valves and the initial silencing box, so if you really wanted to get maximum peak power in a track-style format, you’d want to change the header pipes and collector box too. But for a stage one upgrade, cutting mass and adding improved sound and pep to the performance, a slip-on can is well worth a look.

You can see the fabricator cutting the pipework to suit – like all manufacturing processes, accuracy is key here. Measure twice, cut once… Some of the piping is cut at an angle, which allows for a fabricated bend to be easily built in during the welding process. 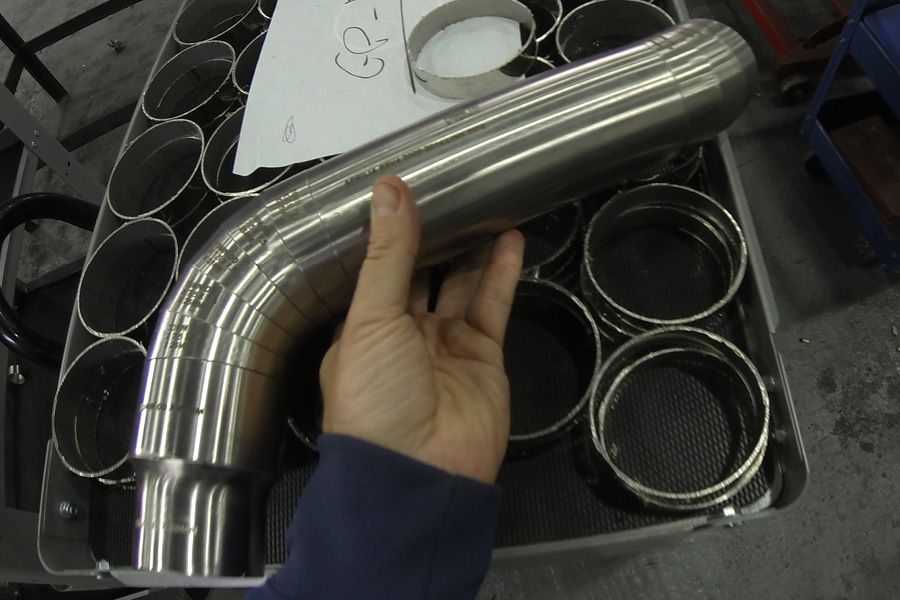 Next, the pipe sections are cleaned up and polished – partly for cosmetics, partly to ensure smooth gas flow on the inside of the system too. The best exhausts will be as finely-finished on the inside parts you can’t see as they are on the outside. Then the welding can begin. You can hear the hissing of the shielding gas flow before the arc is struck, as the welder applies small spot welds to tag the parts together before the main weld. Then he uses a lathe to turn the pipework perfectly smoothly and accurately, at a constant speed, while applying the thin fillet of weld (you can just see the filler rod on the other side). This is kinda what robotic welders do on production lines, but here we have a skilled hand doing half the work.

The final product ticks all the boxes on an aftermarket can. Shiny, with nice neat rainbow welds, much lighter than stock, with a MotoGP-style look and a healthy bark when you crack open the gas. Perfect!

Watch the process in glorious technicolour, including some accidental music in the background (who knew welders liked Wham)...

With thanks to Pro-Race Exhausts, Peterborough.